GNS and Te Papa resident geologist Dr Hamish Campbell and his colleague Dr Chris Adams have been visiting the Chatham Island for over 15 years and many members of the Friends have enjoyed their famed geological excursions. This spring Crispin and I were lucky enough to be among the group of 24. The adventure begins at Wellington Airport, for an easy hour and a half flight on Air Chathams. 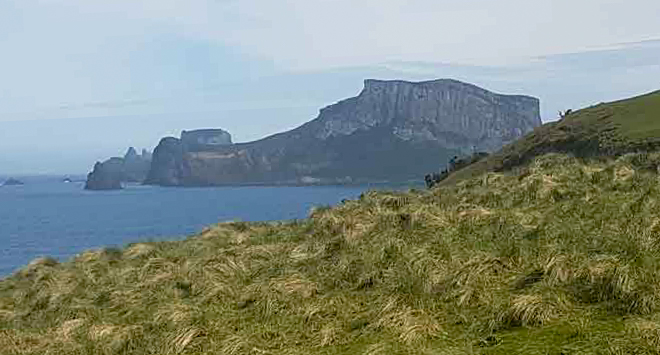 Pitt Island with Mangere Island and beyond

The rock formations in this small, eastern-most territory of New Zealand reveal a fascinating geological story. Among the oldest are 170 million-year-old rocks from the early Jurassic period, 90-95 million years old sedimentary rocks from before Zealandia broke away from Gondwana, and 85-million-year-old basalt lava flows, most dramatically seen in the basalt columns on the north-western coastline. Human occupation of the islands is far more recent, the Moriori arriving around 1800.

Accompanied by Hotel Chathams owner and bus driver extraordinaire, Toni Croon and her doggie co-driver Pipi, we spent six fabulous days exploring every corner of the Island, meeting the locals, climbing ancient windswept volcanoes, walking along magnificent deserted beaches, surfing massive sandhills, and observing lots of rocks. Hotel Chathams revived us with enormous picnic lunches and delicious dinners of local sea food – one night we all sat down to half a crayfish each – before we fell asleep to the sound of waves gently lapping the beach across the road. Our trip included a visit to Pitt Island, where we feasted on delicious paua fritters for morning tea at Flowerpot Lodge, explored the island’s geology and land forms, hunted for ancient fossils, and found petrified wood from trees that once grew in a tropical Antarctica.

Spring was a perfect time to visit, as the stunning Chatham Islands forget-me-nots were in bloom and the weather surprising mild. If you would be keen to join Hamish and Chris next year, do get in touch with Hamish by email

Thank you, Hamish and Chris, we loved every minute!

Feature image: A view from the hotel. Image by Elizabeth Kay