“A very positive and constructive relationship” 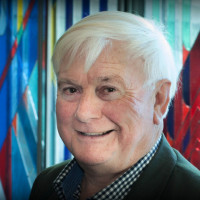 “The Friends of Te Papa have enjoyed a very positive and constructive relationship with Michael Houlihan during his time as CEO of the Museum of New Zealand Te Papa Tongarewa” said the President of the Friends of Te Papa, Gordon Shroff, in commenting on the announcement that Mr Houlihan is to step down from his role as Director at the Museum.

“Members of the Friends have been particularly gratified by Michael Houlihan’s commitment to getting more of our national art collection on view in Wellington and around the country. This has been achieved with the opening of the new Te Ihomatua | Gallery on 4 and the more frequent refreshment of art in Nga Toi | Arts Te Papa on Level Five with exhibits being mounted in thematic or period ‘modules’ which can be toured to other parts of New Zealand. This improved access to our national art treasures has been warmly welcomed by the Friends” said Mr Shroff.

Friends of Te Papa have also welcomed Michael’s leadership in developing new cultural links and being able through these professional relationships to bring exciting exhibitions to New Zealand. The magnificent Aztec exhibition from Mexico is one such highlight and more recently we have been privileged exclusively to host not one but two superb exhibitions from the National Museum of China, China: Throne of Emperors and the Shi Lu: A revolution in paint.

Mr Shroff said there had been a very demanding work load on the CEO of Te Papa over the last four years as the Museum’s mission was reviewed and restructuring had to be undertaken at a time when funding from all sources was under serious pressure. Notwithstanding this pressure Michael made time available regularly to brief the Executive Committee of the Friends and to talk to our Annual General Meetings and fund raising events about issues facing Te Papa and planned developments. This engagement with the Friends has been greatly appreciated.

“As preparations continue for next year’s Centenary of New Zealand’s participation in the Gallipoli and Western Front campaigns of WW I the Friends are very pleased that Michael’s particular expertise in military history and in cultural diplomacy will continue to be available to New Zealand though his new role at the Ministry of Culture and Heritage” said Mr Shroff.