The February earthquake destroyed much of a lifetime’s work by a duo regarded as among New Zealand’s greatest architects, Sir Miles Warren and Maurice Mahoney. 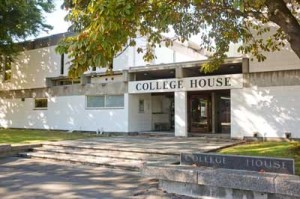 In post-World War II Christchurch, if Warren and Mahoney weren’t building up a storm, they were influencing other architects until it became widely accepted that after the 19th-century Gothic revival and William Morris’s romantic Arts and Crafts movement of the early 1900s, Warren and Mahoney’s form of constructivism was the third architectural movement to sweep the city.

They were the centre of the modernist movement in the 50s, 60s and 70s, known as the Christchurch Style, resulting in a brave new look to Christchurch. Prior to 2012 there were at least 15 Warren and Mahoney buildings, College House sustained much damage and is one of the survivors.

The Friends tour to Christchurch in 2013 included a visit to College House for dinner and to view the art collection.  Here’s a short film where he  talks about why College House was designed in such different way from most university halls of residence and enjoys what he calls Warren and Mahoney’s ‘best ever room’.