The Spring season exhibition contains a tantalising mix of old favourites from the collection as well as lots of surprises. Highlights include some of Bill Culbert’s 2013 Venice Biennale works and a focus on the avant-garde artist Natalia Goncharova, (who is the subject of the Slow Art Evening floortalk on February 19).

Natalia Goncharova (1881–1962) was an important Russian artist who led the avant-garde art scene of early 20th century Moscow with her innovative blend of Russian folk art and European modernism. In 2008, Goncharova once again set the art world ablaze when her 1909 painting Picking Apples fetched USD$9.8 million at auction. This record-breaking price made Goncharova the most expensive female artist in the world and she surpassed her own record several more times in the following years. Goncharova’s work was already well-known and loved by art historians, but this remarkable market interest has brought her to the attention of a much wider public.

Remarkably, Te Papa owns seven paintings by Goncharova, undoubtedly the most significant collection of her work in Australasia. The Spring season of Ngā Toi | Arts Te Papa showcases these works alongside a selection of her costume designs borrowed from the Christchurch Art Gallery. Together, these works demonstrate some of the most important moments in Goncharova’s artistic career, giving us a sense of how her personal, vital forms of expression evolved. This is the first time these works have been brought together in over 25 years, giving New Zealand audiences the opportunity to re-discover her work in this new context of worldwide acclaim. 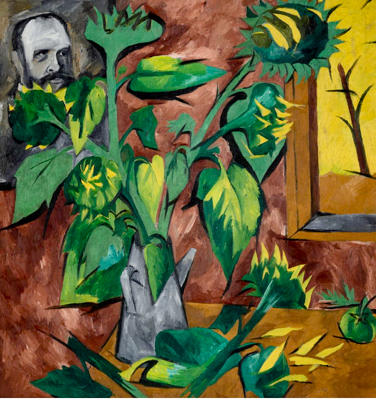 So how did these notable Goncharova paintings end up in New Zealand? During the mid-20th century, the National Art Gallery (forerunner of Te Papa) appointed London representatives to make recommendations on international artworks. In 1965, this role was taken up by Mary Chamot, a curator at the Tate Gallery and an expert on Russian avant-garde art. Chamot was friends with Goncharova and wrote several important books on her work.

Although Chamot understood the importance of Goncharova’s work, the rest of the world had some catching up to do – despite Goncharova’s early artistic success, she died in poverty and relative obscurity in Paris in 1962. After the death of Goncharova’s partner Mikhail Larionov two years later, Larionov’s second wife began to drastically downsize the artist’s personal collection. Chamot convinced the widow to gift three important early works to New Zealand’s National Art Gallery, knowing they would be treasured additions to the growing collection. Later, Chamot generously donated four additional Goncharova paintings from her own collection. Today, the collection is  one of the most valuable and compelling parts of Te Papa’s international art collection.

You can also find out more about how Mary Chamot shaped the art collection in Collecting Modern. This exhibition goes behind the scenes of Te Papa’s collection to tell the story of how the National Art Gallery (Te Papa’s forerunner) built its collection of international modern art during the 20th century.