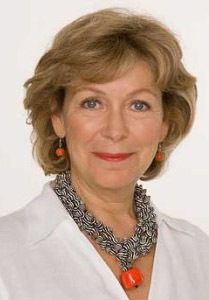 On Sunday 6 April Hilary Kay from the Antiques Roadshow presented a lively and fascinating talk about antique toys. Soundings Theatre at Te Papa was packed with a crowd eager to hear from the famous toy expert. We were in the palm of her hand – oohing and aahing over the gorgeous and rare examples she showcased throughout her talk.

Hilary demonstrated how, when toys are associated with personal stories, they are the impetus for heartfelt, neck-tingling connections. A key message was that when the history and stories behind toys are unlocked, they become more than precious playthings – they provide meaningful links to key historic events. Hilary allied antique toys to the industrial revolution, war, technological innovations, the invention of new materials and changes in society.

She began by highlighting toys produced in the 1840s, a time when the effects of the industrial revolution were about to have an impact on the world of children, and ended in the post-World War Two era.  Until the mid-twentieth century only extremely privileged children had toys.  This was primarily because toys were so expensive, but also because it was only children from wealthy families who had leisure time.  Most children had to work or, worse, beg for a living. By the 1950s the world was a very different place: for the first time most families had a disposable income and, perhaps more importantly, most children had time for play. 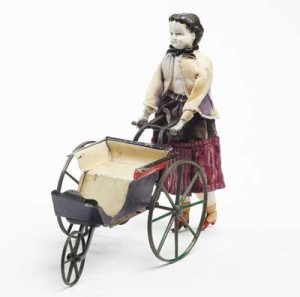 A highlight of the talk was Hilary’s discussion of one of her personal favourites, a mechanical tinplate toy biplane by Märklin that loosely replicated the Wright brothers’ 1905 invention. She knew that one example of the toy was owned by the ‘King of Siam’. Then in the 1990s when curating an exhibition about childhood in Britain, Hilary was surprised to discover another example, this time owned by the Dowager Duchess of Devonshire. The toy plane had been tucked away in a back room at Chatsworth House. Hilary was able to discuss the £100,000 toy when filming an Antiques Roadshow at Chatsworth. Through the magic of TV, a viewer was able to shed light on the connection between the plane in Thailand and the one from Chatsworth House. The two boys who had owned the toys, the future King of Siam and the Duke of Devonshire, were inseparable friends at boarding school.

The evening was filled with spectacular eye-candy for toy and doll enthusiasts. Many examples celebrated the supreme quality of German-made examples and the marketing prowess of the German toy industry. German manufacturers were the first to create toys with names for specific locations and  were often the first to produce a toy that reflected the latest new invention, be that a car, train or plane. Also key to the success of the toy industry were toys that required endless new additions such as dolls’ houses and train sets.

Many exquisite, rare and fascinating examples of antique toys from around the world were included – a British poured-wax Princess Alice doll, French Jumeau Bébé dolls and for the boys the famous Hornby train sets. From Te Papa’s collection was a mechanical walking doll and perambulator.  Although rather clunky in comparison to European toys, it significantly marks the debut of American toy manufacturers.

Hilary ended her talk by touching on a few post-World War Two highlights – Barbie, (apparently three Barbie Dolls are sold every second) television and film inspired toys and toys like space ships and robots that appeal to science fiction enthusiasts. But perhaps most notably, Hilary left us with an important final message and reminder – ‘toys are for fun’.