Captain Cook, his officers and accompanying naturalists aboard the Resolution explored Dusky Sound for six weeks during March-May 1773. Their observations became New Zealand’s first BioBlitz, with the broad-billed prion and little penguin among the birds they described and painted in that particular ‘type locality’.

In 1777, the prion was the first New Zealand bird to be given a published scientific name, Procellaria vittata (now Pachyptila vittata).

Te Papa bird curator Colin Miskelly has led three research expeditions in collaboration with the Department of Conservation (with a fourth trip to come) to southern Fiordland since 2016 in an attempt to solve some critical questions. What has changed in bird species since Cook was there in 1777? And what are the effects of rat and stoat eradication undertaken by DOC since the 1980s?

Friends of Te Papa enjoyed finding out about the highlights of the team’s challenging explorations from Colin, which included investigating some intriguing mysteries regarding prions and grey-backed storm petrels. 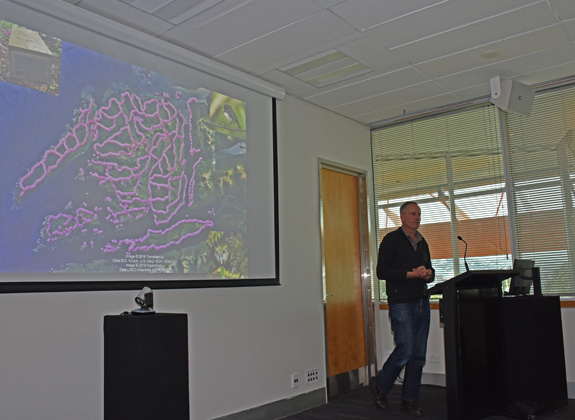 We were fascinated by Colin’s description of the intensive stoat trapping on Resolution Island. Stoats can swim up to 3km but because of the cold water, the distance is limited to 1km in Fiordland.

Kakaruai (South Island robins) have survived naturally on Breaksea Island. Since stoats were removed from Resolution Island and surrounding islands in 2008, kakaruai have colonised many more stepping-stone islands. The survey showed they are stronger fliers than tīeke (saddleback) and mōhua (yellowhead) which have been translocated to Breaksea Island, flying up to 1.7km.

The kakaruai also dominate other native species on the islands including riroriro (grey warblers), ngirungiru (tomtits) and tauhou (silver eyes). This domination is one effect of the stoat removal.

In November 2016, the team was delighted to find broad-billed prions breeding on two small islets among the Seal Islands. The chicks they saw are the first confirmed breeding records for the prion in Dusky Sound (the type locality) nearly 250 years after Cook’s visit.

Colin’s Fiordland trip in February 2020 (pre-COVID lockdown) involved searching for nesting storm petrels on Secretary Island and was partially funded by the Friends of Te Papa.

We were delighted to hear a recording of the call, which is still a mystery as the team found no evidence of any petrel species on Secretary Island.

To further investigate the mystery call, an acoustic monitoring device was installed at the same site in February. Friends will await with interest to see if more of the calls are captured when the device is recovered during the next stoat trapping trip to the island.