Jo Newman, Convenor of the Mt Victoria Historical Society, entertained Friends and guests with accounts of some of Mt Victoria’s characters from the late 19th century, set against the backdrop of the suburb’s rich history.

While Thorndon was predominantly a Church of England stronghold, the Mt Victoria of the 1880s and 1890s was settled by many religious non-conformists. These people were well regarded in the area and highly motivated social activists. 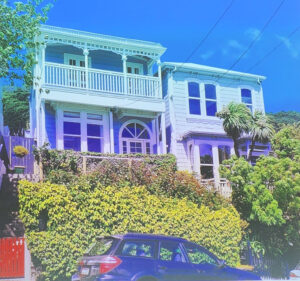 Built by Lewis as the Manse for the Congregational Minister

Notable among them were:

Kate Edger who attained a BA in Mathematics and Latin in 1877, becoming New Zealand’s first female university graduate and the second in the British Empire. Her non-conformist beliefs underpinned her work as an educator, her advocacy of community causes and championing of the women’s suffrage movement.

Alfred Lewis who by the early 1900s was one of Wellington’s best-known businessmen, having worked his way up to become the manager and then owner of the Wellington Aerated Water Company. Lewis was one of the founding members of the Courtenay Place Congregational Church in 1887 and was extremely generous in his gifts to the Church and social causes throughout his life.

Agnes Hutchinson, a Presbyterian and another social activist, who trained as a nurse at Wellington Hospital and in 1895 set up one of the many private nursing homes in Mt Victoria from her residence at 33 Brougham Street.

Jo showed photos of this property and the houses of other non-conformists that are still standing in Mt Victoria – making these historical figures all the more real.

By the end of her talk, I felt we were only seeing the tip of the iceberg of Jo’s wide-ranging knowledge of the suburb she loves and has lived in for nearly 30 years.