As a teenager, I sellotaped a stylized koru print saved from an art calendar to my wardrobe door. Its black and white ‘simple’ format intrigued me. Was the white in the foreground or the black? Or did they hold equal value? Cleverly it demanded closer inspection.

Now around 45 years later at a floor walk at Te Poi, it has been such a delight to come out of that closet to learn about its creator, New Zealand artist Gordon Walters.

Lizzie Bisley, Te Papa’s Modern Art curator, led us on a thought-provoking journey through the maestro’s work at his retrospective exhibition. She shared fascinating insights into his inspiration and highlighted the various phases of his career. New material not shown previously sits well besides his iconic works.

Born 100 years ago in Wellington, Walters began his art studies at Wellington Technical College whilst working as a trainee commercial artist. 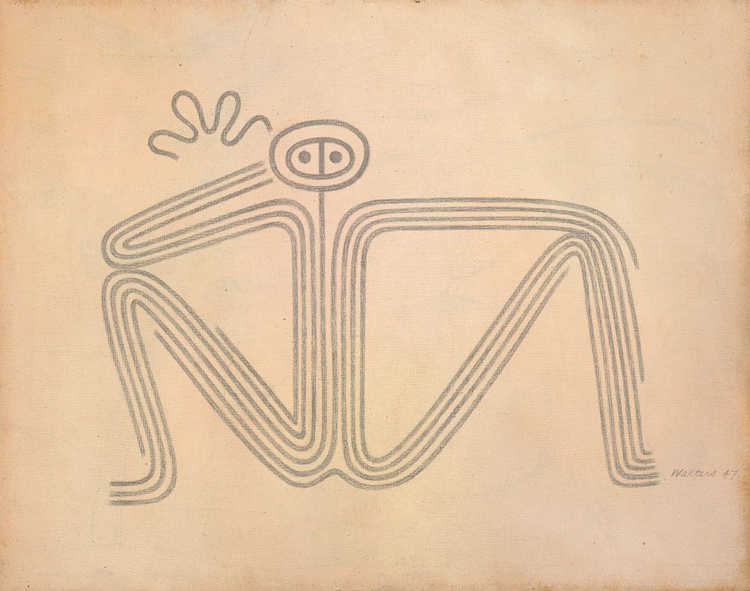 Walters’ association with close Dutch friend Theo Schoon had a huge influence on his work. Schoon had a European trained art background. He was very interested in Maori rock drawings, citing them as New Zealand’s finest art form. Together they travelled to sites in the South Island. Schoon would take photos and sketch, recreating something from the past. By contrast, Walters’ motivation was to interpret it to create something new. Walters also took on motifs from tribal art and was impressed during his overseas travels that this form of art was given full recognition by being exhibited.

He drew inspiration from the European modernism movement too. Chrysanthemum (1944) demonstrates his progression towards abstraction and the influence of Piet Mondrian and Paul Klee. This painting fascinates me because he kept it and used it for his own motivation. He wrote that the work was “one of my happiest, and the one which, if I find my efforts flagging, gives me the necessary charge to start again.” What a marvellous elixir, that long after the work was executed, he could be refuelled by the freedom and pleasure he experienced when painting it originally.

My little wardrobe print came from his koru period. These works remains timeless and fresh. No brush strokes. No texture. Clean sharp shapes. Absolute precision in his rendering of mostly repetitive forms. Today it would be computer generated. In the 1960s, Walters painstakingly achieved these results with compass and rulers. It was enlightening and fun to see that he also produced these works in bright colours and large formats.

Walters’ scrap book from 1951 is a true gem. It is rich with his personal sketches and clippings, from sculptures to textures to tribal art, derived from all around the world. A lovely insight into his creativity.

Another fascinating part of Walters’ story is his connection with psychiatric patient Rolfe Hattaway. Schoon had met him working as a nurse and shared his work with Walters. Hattaway would draw adeptly moving from object to abstraction at great speed. Moved by Hattaway’s freedom of expression, Walters transparently used some of Hattaway’s designs in his own work.

It was interesting also to learn that Colin McCahon and his wife Anne had been the only private collectors to buy one of Walters’ small works at a 1966 exhibition held in Auckland. Also that Walters would not exhibit many of his works in the 1950s because he felt that the public’s hostility towards them was too great at that time. When dealer Peter McLeavy did show them in the 1970s, they were hugely popular.

The panels describing Walters’ career with its different motifs and influences from European to indigenous and geometrical sources certainly enrich our understanding of the artist and his career as well.