Once upon a time there was a man called Au∂un. He was a poor man from the Westfjords of Iceland. He sailed to Greenland and purchased a polar bear there giving all that he had for it intending to give the bear to King Sveyn of Denmark.  So King Sveyn must have had a protype zoo in Denmark around a thousand years ago. For over 800 years the Tower of London was the home of the royal menagerie.

Thinking along this track a little further, the palaces and great houses all over the world contained collections of books, called libraries, art works in art galleries and often also menageries.

Zoos are collections of living things as museums are of inanimate things. Such collections are of great vintage but they have for most of recorded history been the property of the rich. Sometimes that has been the case quite recently. 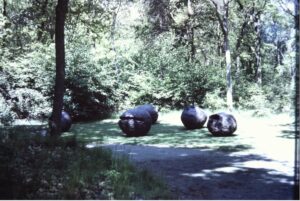 In the centre of the Netherlands there is a large park. It was bought by a rich businessman who built a fantastic hunting lodge there and populated the park with animals for hunting. So a functional open air zoo. His wife collected pictures by people like van Gogh and Seurat and so she built an art gallery in the park and collected sculpture for outside. Cycling through the park you can come across deer and sculpture in this gender-based collection. (No more hunting though.) If you are, someday, visiting Europe, the Museum Kröller-Müller is a great place for a day trip and a picnic in the woods.

Eltham Palace near Greenwich restored by the Courtauld family contained their art collection and their pet lemur which occasionally bit their guests. But such rich people’s indulgencies are waning and never were in New Zealand. In Wellington the National Library is public; the zoo is public and Te Papa is public. Private collectors of art may have a dog and maybe a racehorse but the horse is probably not in a palace mews. No-one would think of gifting a polar bear to the Prime Minister.