It’s the school holidays and Te Papa opens at ten. There are already a few hundred parents, aunts, uncles and grandparents waiting with young people who will soon be back at school. Once inside, there is a queue at the Gallipoli exhibit. Well done Richard Taylor. But most are heading for Te Taiao. There are so many that you can watch them rotating in a huge circle around the exhibits. Above them flies Haast’s eagle with its claws reaching forward while below, the pelvis of a moa shows what those claws could do.

A boy stands in front of a case looking into the sad brown eyes of a small moa below which the sign reads ‘extinct’. 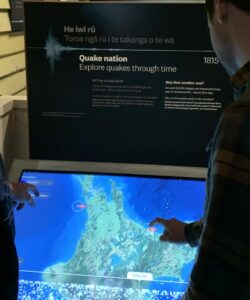 At the far end, the caldera which Is Lake Tāupo erupts repeatedly through the millennia. The children build houses and then vibrate them to destruction before entering the earthquake house. Around the corner children are creating mini tsunamis while the image of what would happen to the Wellington waterfront if a real one were to enter Wellington Heads is modelled.

Is the giant squid a model? No, it’s the real thing.

It’s easy to forget just how rich an education is available at Te Papa. So much thought and work has gone into each exhibit. So many are interactive so that young people will remember and learn. In school you sit at tables and desks. At Te Papa you learn in so many different ways by walking around and trying things out. The teachers are nowhere to be seen but they knew what they were doing.