Most museums have collections stored under a roof or two. Many of the objects and artifacts within may have been outside at one time: the birds and beasts in Te Taiao at Te Papa; Nuku Tewhatewha, the pātaka in the Dowse Art Museum in Lower Hutt; Te Winika, the waka in the Waikato Museum. Sometimes, though, a museum building is too small to contain a particular collection or the objects are best seen in their natural setting. Heritage New Zealand has a collection of buildings in its care which represent various states of New Zealand life and architecture such as Totara Estate near Oamaru from where the first frozen meat shipments departed for England. 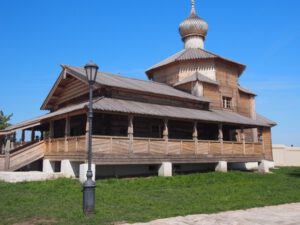 But what does one do for a whole town?

In many parts of the world there are open-air museums, sometimes a town or village which is being kept in its (more or less) original state such as Old Sturbridge Village in Massachusetts.  At other times old buildings are brought to a location where they can be seen alongside each other and preserved. In the open-air museum Arnhem in the Netherlands you can visit a large barn for livestock, at one end of which is a rail and then, still inside the barn, the small dwelling for the farmer and his family. Central heating in winter was provided by the livestock, as was the smell and the flies. 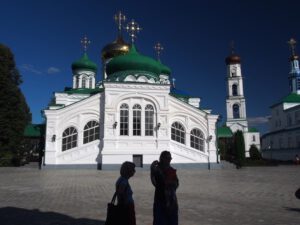 Sometimes an open-air museum is a complete re-creation. One in progress is near Kazan, the capital of Tartarstan. There is a story attached. Ivan the Terrible attacked Kazan and was repulsed. Not a chap to let this happen, he found a raised island in the Volga river and decided to build a new town, Sviyazhsk, to house all his people before another attack. So he had a town prefabricated, floated it down the river, and had workers assemble it on site. The small wooden church is still there. Some of the rest is being rebuilt since, for a time, the island in the river was a gulag, as was the case with the Raifia Monastry near Kazan, now completely rebuilt and again an orthodox monastery after demolition during the Soviet period.

Thinking about it, everything you pass can be seen as part of an open-air museum: wharenui on the east coast near East Cape,  the first state houses in Petone, stately houses in Masterton. They all have a history and so have their own stories to tell.