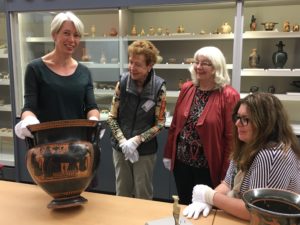 Tucked away in Old Kirk, the School of Classical Studies has a fascinating collection of objects from ancient Greece and Rome. It is a museum collection with a unique difference, as all the objects are able to be removed from their cases and handled by students.

Diana Burton took us through a broad sweep of antiquity, from the unsophisticated geometric ware c 600 BC, through the development of red figure ware to the beautiful c 500 BC Athenian glossy black figure ware. And yes, they suddenly discovered the merit of reverse the figure painting from being in red to black, using a special slip which fired almost like a glaze. The painters also used a white slip, often for depicting the skin of women, but white slip was expensive and so fragile, it tended to flake off.

One black ware pot retained a lovely connection with its potter; an indented thumbprint, through careless handling.

Diana showed how the objects in the collection were not just beautiful pieces, but had so much to reveal about their era, and its people. Typical themes are the gods and battle. The Greek states spent so much time fighting each other these are in fact scenes of real life in c 500 BC.

We saw a beautifully painted little round pot which once held expensive perfumed oil. A man would have tied it to his wrist when he went to practice wrestling. Afterwards, because of the scarcity of water, he would have scraped the dirt and sweat off his oiled body with a bronze strap, then used his expensive oil like a modern deodorant.

Interestingly, around 1200 BC a cataclysmic event in Greece and the nearby Mediterranean wiped out all traces of earlier civilisations and all the arts, including writing, were lost. This is why there is little dating earlier than around 700 BC, and why writing does not reappear until about 500 BC.