Peter Wellings, Wellington ophthalmologist, who may well have gazed into the eyes of many in the audience, stood beside a large and compelling image of a beautiful garden. It was black and white. With a tap of his finger he saturated the image with colour. Aha. So began his lecture. 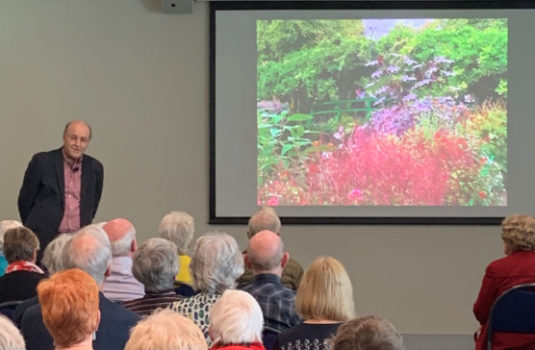 We listened carefully as he explained that our brains take colour very seriously, devoting a great deal of energy to eyesight in general and the perception of colour in particular. Guiding us through the science of psychophysics, wave lengths and prisms, we arrived at rainbows. Yes, seven colours, although Peter says indigo isn’t seen, while cyan is. A rainbow will never seem quite the same again. This is just the beginning of human perception of colour. We can actually perceive a million or so colours.

Towards the end of Peter’s lecture we were gripped by his explanation of red/green colour blindness, ultra violet light, the effect cataract operations can have on the perception of colour, the likelihood of colourful dreams, synaesthesia, and which animals perceive which colours.

With Peter’s excellent images and clarity of thought, our eyes were delightfully opened to the science of colour.