Review: The Worlds Within the Books

Curator Photography Athol McCredie gave a wonderful small group floortalk to the Friends at the exhibition Worlds Within: Photobooks of Aotearoa New Zealand on Level 5, Toi Art. The object which can be uniquely described as a ‘photobook’ first appeared in Aotearoa in around the 1930s. The exhibition has a number of examples from Te Papa’s collections displayed within glass topped cases along its long wall. Athol has supplied the books which are able to be perused on the low table, and he also brought books from his personal collection to illustrate his talk. The first example was The Mountains, The Bush & The Sea, by John Pascoe; a pictorial story valuing the back country, as a ‘sort of manifesto’. 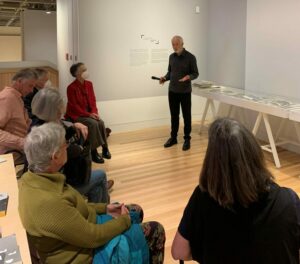 Athol defined a photobook as being a book in which text is adjunct to images, where the photos tell the story. In those early days there were many ‘scenic’ books about New Zealand where photographs supported text. He showed us Gift of the Sea, a publication from the early 1960’s by Brian Brake and Maurice Shadbolt, printed in Japan in an attractive cover, with a print run of around 100,000 copies. We compared that to a later book by Gary Baigent called The Unseen City, which was published within New Zealand, and was much ‘rougher’ in content and format. This would not have been attractive to tourists; it is a more personal vision. As was Ans Westra’s notes on the country I live in, with text from James K Baxter and Tim Shadbolt, which was cheaply printed, featuring people she knew on the streets in 1971/2, and which ‘captures the time’.

A photobook can hold an entire world within it’s covers: without text a story unfolds, personal to it’s maker, a wee niche of their life, easily accessible and open to interpretation to the reader holding the object within their hands. There is a move back toward having a tangible object, with an audience for physical objects and demand for real things and tactile experience. One of the recent books which won an award at this years NZ Photobooks Awards has a cover which feels like skin.  A book forces you to look at photographs in sequence. Photography is a serial medium of capturing one image after another which therefore work together –  unlike the work of a painter. Athol said that new voices can come into the world through photobooks, without the need for exhibition space to hang the images on a wall.

The exhibition has had it’s season extended so do stop by when you are in Te Papa. Enjoy the books with their variety of worlds within.