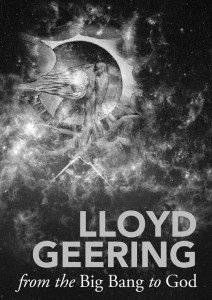 According to Sir Lloyd, his latest book  ‘From the Big Bang to God – our awe-inspiring journey of evolution’  (published in May 2013) was inspired by his participation at Science Express at Te Papa in October 2010, where he addressed the question: ‘What is the biological significance of religion?’

Central to the book are ideas derived from a series of notable thinkers including Ludwig Feuerbach (1804-1872), Pierre Teilhard de Chardin (1881-1955), and Karl Popper (1902-1994). Like them, Sir Lloyd describes the world as we know it in terms of 1) the physical world, 2) the mental world, and 3) the mental product world. Sir Lloyd explains that gods and God are constructs of the human mind, simply products of collective human thought. In a nutshell, we humans made God.

He explains so clearly the biological advantage that we humans have gained over all other biological entities on Earth: the evolution of language and hand in hand with it, our extraordinary mental capacity. Once you understand this, it becomes immediately apparent that any collective human constructs of the ‘human thought world’ are simply unexpected artefacts of evolutionary potential.

I urge you to grab a copy . Everyone should read this book. It is all about the machinations of the collective human mind and its most conspicuous products: culture, religion and science. It is a ‘new Great Story’, a modern explanation of everything. It is fluent, concise and very readable. You won’t be able to put it down.