Our visit to the Sikh temple Gurudwara Sahib in Naenae was such a memorable experience, not the least because of the warmth and generosity that our Sikh hosts bestowed upon us. We were greeted outside the Gurudwara by Manjit Grewal, Chair of the Wellington Interfaith Council.

Before entering the Gurudwara, Manjit indicated various features of the temple’s exterior, including the Nishan Sahib, a Sikh triangular flag with a tassel at its end, hoisted on a tall flagpole above the Gurudwara roof. The emblem on the flag is known as Khanda,  the symbol of the Sikh faith. This depicts a double edged sword called a khanda in the centre, a chakkar which is circular and flanked by two single edged swords, or kirpan.

This Gurudwara – the largest Sikh temple in the lower North Island – is ornate, with bright gold domes imported from India.  The largest dome weighs about a ton and was imported in eight different parts. 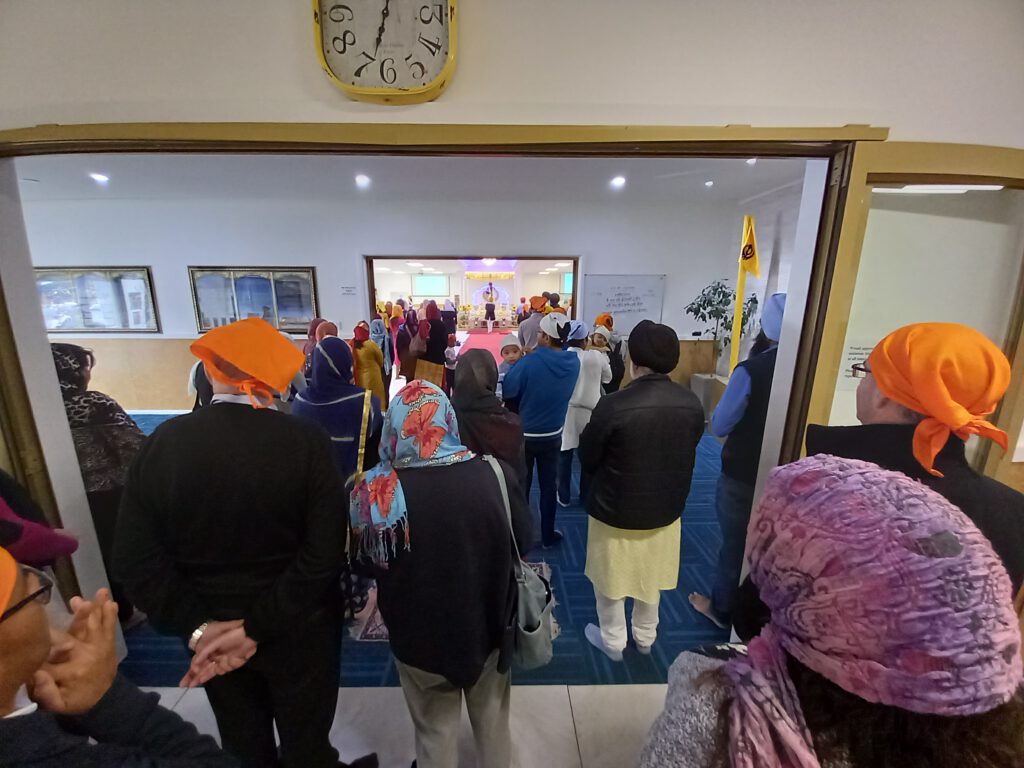 Friends group awaiting into the hall of worship

In accordance with Sikh protocol, members of our group donned head coverings, and inside the Gurudwara entrance, we discarded our shoes and followed Manjit into the library which houses books and materials designed to help each worshipper develop their faith. Manjit indicated where the Sikh Holy Book Guru Granth Sahib is carefully put to rest each night in its own room nearby; Sikh worshippers treat their Holy Book as a living Guru.

Manjit explained that male Sikhs generally have Singh “lion” as their middle or last name and female Sikhs have Kaur “princess” as their middle or last name.   Male Sikhs who have undergone the Khande-ki-Pahui )baptism by Khanda) which is an initiation ceremony known as Amri, are from the day of their initiation known as Khalsa Amritdhari Sikhs, and they must at all times have on their bodies five Ks [five external features]:

We entered the diwan hall with anticipation; this hall is the main room of worship.  We noted the Guru Granth Sahib was on a takhat, (small elevated platform) under a canopy, in front of the worshippers who sit on the floor. The priest conducting the service waved a chaur (fly whisk) which shows great respect for the Guru Granth Sahib. This holy book contains 1,430 pages which are sung and Sikh worshippers typically bow or prostrate before it on approach. During each service worshippers also receive Karah Parshad (a small portion of sweet flour and ghee) in their cupped hands.

Following the service our Friends group was invited to join worshippers for langar, a delicious vegetarian meal served by volunteers in a separate hall. This was a meaningful ending to a very special tour, and our sincere thanks again to our Sikh hosts for their kind hospitality.