The diplomacy of art

New Zealand-China trade is booming. But a solid relationship on which both countries can rely requires more than just trade. Cultural links, enormously valuable in their own right, are essential for deeper understanding and a firm relationship.

Te Papa has taken the lead nationally in pursuing cultural diplomacy with China – with its counterpart, the National

Museum of China in Beijing, and other major museums throughout China. Most notably, starting in 2012, the 40th anniversary of formal bilateral ties, Te Papa arranged for the acclaimed Kura Pounamu exhibition to be displayed in Beijing, Hangzhou, Guangzhou, Chongqing and Xian. Two further exhibitions, one on contemporary art and one on photography, were also organised for Shanghai and Beijing respectively. 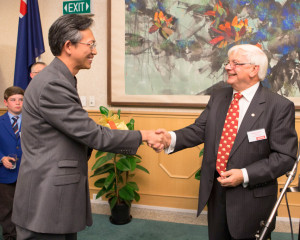 New Zealand’s government demonstrated its support by the presence of its ambassador to China at several exhibition openings.

Te Papa has also collaborated with the National Museum of China over the public display in 2012 in Beijing of the ‘Mao cloak’, presented to Chairman Mao Zedong in 1959 and its loan for display in Te Papa last year. Te Papa’s personnel have therefore had wide-ranging dealings with their Chinese counterparts, expanding the national museum’s capability to work at the international level.

China has responded enthusiastically in the cultural field, not least with the two magnificent and in part unique exhibitions sent from the National Museum of China and currently on display at Te Papa: Throne of Emperors and Shi Lu: A revolution in paint.

Hosting the Gala at the Chinese Embassy was a generous demonstration of the importance China attaches to the cultural relationship and to the key role played by Te Papa, under Mike Houlihan, its outgoing Chief Executive.