Dr Rebecca Rice first encountered the work of  Sarah Featon while researching for her PhD. ‘Brimming with life; springing forth from the drawers of the works on paper storeroom’ at Te Papa where she is now Curator of New Zealand Historical Art.

Sarah Featon and her husband Edward issued a prospectus for subscriptions in 1886. They disputed the belief that New Zealand had few pretty flowers or showy plants.  The Art Album of New Zealand Flora, would be the first fully coloured art book to be printed and produced in this country, and used chrome lithography. Unusually for the era, it included the Māori names and their uses for the plants, perhaps because the Featon’s lived in Gisborne. 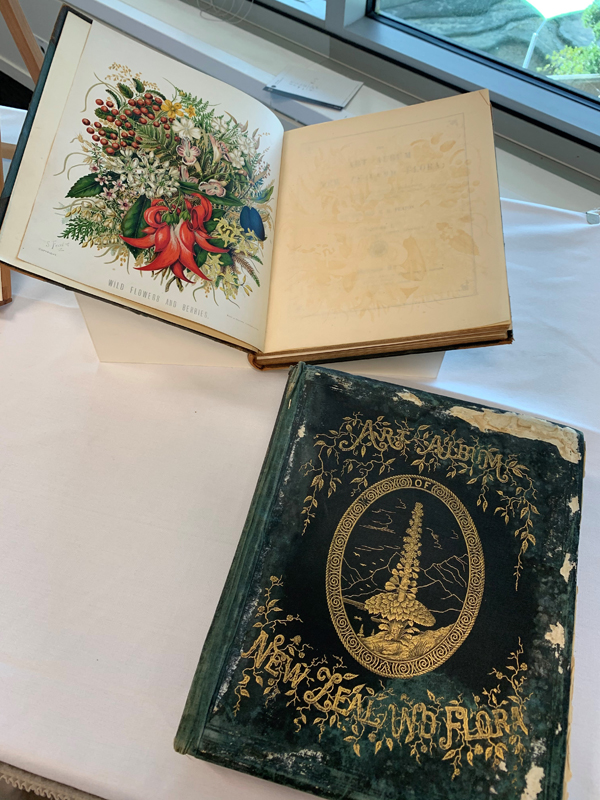 Rebecca’s slides introduced us to the rich world of botanical art by females in 1880s colonial New Zealand, with reference also to Mrs Charles Hetley and Emily Harris, while we sipped our bubbles, and with the added treat of works from the storerooms on display for us to encounter in person. Nineteenth century New Zealand was a time of collecting and classifying with an explosion of interest in the natural attributes of this new land. The botanical representations of flora from 1850s on bridged art and science, each at the bottom of the hierarchy of its discipline. The still life genre of botanical drawing was among the genteel creative pursuits allowable to females. Skills were acquired but not pursued seriously, so female botanical work was treated as amateur and criticised for not being scientific enough, with dissections being absent or poor.

Only male offerings were regarded as scientific and worthy of financial support and publication. An example given was that James Hector supported Walter Buller into a government grant but when Georgina ‘Mrs Charles’  Hetley requested funding for an expedition to collect specimens, he constantly denied her. She wanted to create ‘coloured portraits’ of flora from fresh specimens as the collections of the time were dried and therefore colourless. Her book The Native Flowers of New Zealand c1888 was one of those on display, demonstrating to us the vibrancy achieved by lithography. We could also peruse three volumes published by Emily Harris c1890: New Zealand Berries, Flowers, and Ferns.

Rebecca said that the fact that these publications by female artists are now in libraries and museums has been to our advantage. Being part of the collections of an art museum allows them to now be displayed, regarded, and respected as having both artistic and scientific value. A challenge going forward is for us to broaden our gaze to include those who have been excluded. Te Papa is trying to redress this balance, and to think more critically about different angles and ways of looking at our past.

Once the works were safely removed we enjoyed a delicious High Tea with sunshine streaming in the windows, around tables decorated with flowers. A most enjoyable afternoon.