14 November 2022 marked the 100th anniversary of the birth of Douglas MacDiarmid (1922-2020). Curator Modern Art Lizzie Bisley treated a group of Friends to a back of house tour into the works of this acclaimed New Zealand expatriate painter.

In the 1940s with no formal training, MacDiarmid began to paint as student at Canterbury University. Some of his sketches included line drawings and paintings of his friends including up-and-coming artists from the Christchurch School of Art – John Drawbridge, Rita Angus, Leo Bensemann and Evelyn Page. The sketches show his real skill as a draughtsman with simplicity of line. After the end of the Second World War he left Wellington and spent some time in London.

MacDiarmid’s art – which had slid under my radar and I suspect that of quite a few other New Zealanders – gave me an impression of a painter who experimented and pushed creative boundaries in art. Using pencil, watercolour, oil and acrylic paint and varied surfaces for his paintings – cardboard, canvas and wood, MacDiarmid painted diverse scenes including landscapes, cityscapes, still life, portraits, figures, abstract and semi-abstract forms, many inspired by his extensive travels.

I particularly enjoyed his cubist, small, oil on board, Point Halswell from the 1940s. This piece once exhibited at his friend Helen Hitching’s gallery, depicts a Wellington coastal landscape reduced to geometric shapes and bands of light which highlighted MacDiarmid’s skill as a colourist and gave the impression of movement and reflections on the water. An early, small work from 1947 when he had moved to London, depicted a rural scene near his hometown of Taihape. It shows distinctive landscape of the area with papa cliffs and two figures in the water. 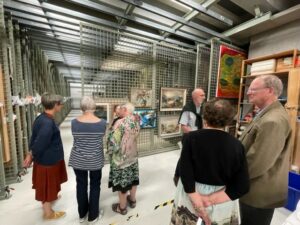 Although most of his work is held in France, Te Papa holds most of MacDiarmid’s earlier works, many of which were acquired by way of gifting from the personal collection of his friend Helen Hitchings, New Zealand’s first modernist dealer gallery owner. The pair maintained a close relationship with each other and she exhibited his work in her Wellington art gallery in in 1949. On her travels to Europe in 1951, she asked her friend MacDiarmid to make sketches to illustrate her travels. The sketches we viewed are charming, fun and lively and show a sense of the artist’s humour and skilled use of line and colour.

From 1952 MacDiarmid was a full time artist in Paris where he was based for most of the rest of his life and had an extremely prolific career as an artist. Two of MacDiarmid’s French landscape paintings depicted a real sense of movement and light depicting the weather. A landscape from 1956, was the first which Te Papa acquired for their collection which points to the importance of MacDiarmid’s work as a New Zealand artist at that time.

The MacDiarmid family have created a Centenary Art Trail  which directs you to all the works around the country where you can view artworks by MacDiarmid. His biography Colours of a Life – the life and times of Douglas MacDiarmid is written by his niece Anna Cahill in 2018. MacDiarmid dedicated his life to doing what he loved and doing it on his own terms.