A relatively unknown feature of New Zealand’s biodiversity intrigued the Friends of Te Papa at a talk by botanist and orchid specialist Carlos Lehnebach. To our surprise, Carlos shared that there are over 110 species of orchid throughout New Zealand, with more than 70% of these species that exhibit a diverse range of colours and shapes being endemic. Most are terrestrial with only nine species being epiphytic. More than 30% of our orchids are of conservation concern. Eleven species are threatened and 31 are at risk. There are around 20 undescribed species. 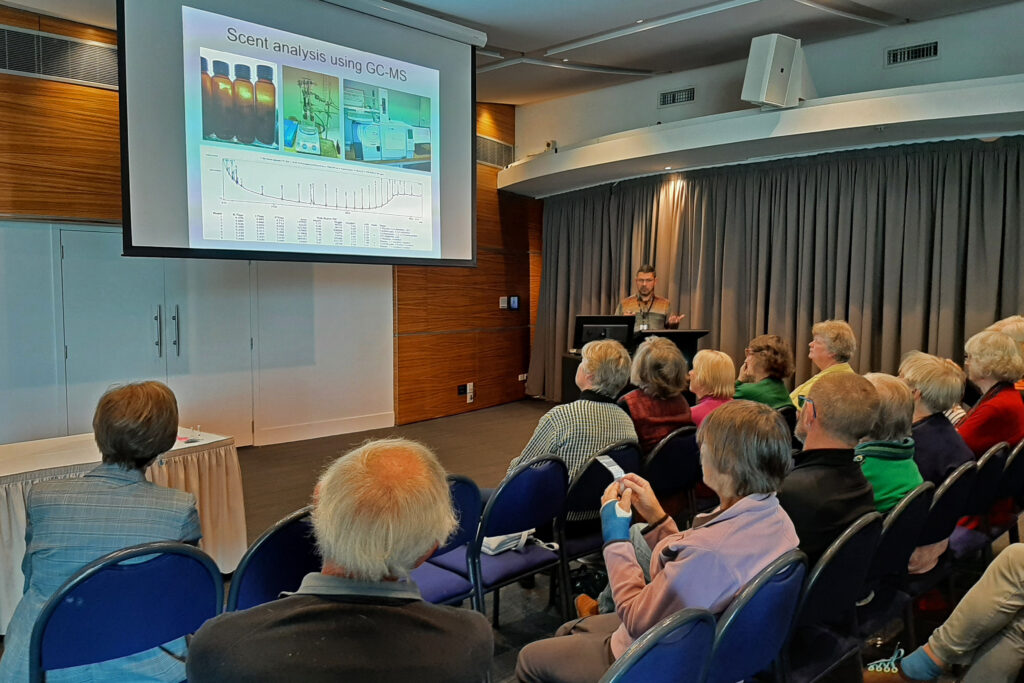 Carlos described how spider orchids are pollinated by fungus gnats. The orchids act as traps with the insects getting entangled inside the flowers until they are pollinated. The orchids resemble fungi visually and in odour to attract the gnats; meaning pollination is by deception. We appreciated the opportunity to examine fungus gnats in detail as Carlos passed around preserved specimens.

Orchid habitats are widespread in New Zealand including in wetlands, forests, at higher altitudes ,and even on traffic islands near Te Papa. Threats to orchids include habitat destruction; disruption of partnerships – for example with gnats as the pollinators; trade online, and at nurseries; illegal collection by poaching; and taxonomy uncertainty (describing species accurately).

The research Carlos undertakes revolves around species recovery, seed germination, monitoring, pollination, mycorrhiza (the symbiotic association between a fungus and the root system of a plant) and taxonomy. In pollination experiments, Carlos filmed orchids and insects, showing both male and female gnats pollinate flowers. He is undertaking gas chromatography/mass spectrometry (GC/MS) scent analysis to better understand how orchids attract the gnat pollinators. Orchid seeds need mycorrhizal fungi to provide essential nutrients and minerals for germination. It is unclear what the fungus gains from this process. Not much is yet known about the orchid/fungus interaction in New Zealand.

Carlos aims to extend the knowledge of orchid germination through working with other botanists and his students. An illustration of this collaboration is successfully propagating an at-risk native wetland orchid, Spiranthes australis, together with Jonathan Frericks, by inoculating the orchid with fungi pelotons. This is the first time in New Zealand this process has worked. Some of the resulting plants were donated to collections at Wellington Botanic Garden and Otari-Wilton’s Bush. Carlos explained how he is involved with testing different ways of germination at the Lions Plant Conservation Laboratory in Otari. Isolating and culturing fungi from within the roots of orchids will be used to germinate orchid seeds in the future.

The next steps in researching New Zealand’s orchids include seed banking; fungi long-term storage (cryo-storage); pollination biology; conservation genetics; and propagation science. Carlos suggested ways we can help save our diverse and rare orchids including reporting findings, for example, on iNaturalistNZ or social media; not removing plants from the wild; not supporting the trade of orchids collected from the wild; promoting and supporting children’s interest in in natural history; and sharing knowledge.

What a treat it was to have Carlos share his extensive knowledge of our diverse and threatened orchids as well as inspiring us to assist in conserving these rare plants.