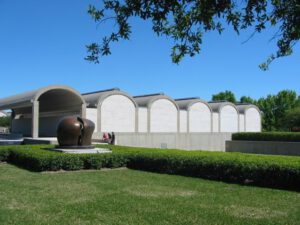 Image of Kimbell Museum by K.Kuiper

We are Friends of Te Papa which means we are friends of a building as well as what is in it and what goes on within it. Coming into Wellington Harbour you see Te Papa from the water, a set of shapes and colours with its north facing structures almost blind to the water. Then, walking on the south side of Cable Street you see its huge entranceway inviting you in. What does it say about Te Papa? It is not just a repository of the collections within and the exhibitions which it hosts, but an architectural presence itself.

All museums have such a way of being present. London is full of museums. The Tate Modern is a former power station and it looks like it. Tate Britain is a pseudo Greek presence, not at all like a power station.

Probably my favourite museum is in Fort Worth, Texas. (Yes indeed.) It was designed by the great Louis Kahn and it is the Kimbell Art Museum. How does it present itself? It looks like a set of silos. But if I were a picture, I would want to be hung inside the Kimbell. Mr Kimbell had a lot of money and very good taste. Look it up on Google and you will see why. If you can’t manage to get to Fort Worth you can download a screen saver to show you what you are missing.

But the Kimbell is a private art museum, not a national museum like Te Papa. The Estonian National Museum is a national museum, but is not like Te Papa either. It looks from the air like a long runway. It is in fact built on top of a runway used by the Russian aircraft when Estonia was occupied by its neighbour.

Why would you build a museum that looks like a runway?

Also food for thought is a talk by Ken Gorbey which will be on the Friends programme this year. Ken Gorbey was a major mover in planning the nature of Te Papa’s mission and then that of the Jewish Museum in Berlin. What should museums do inside their architectural shells, he has asked all his working life. Look out for his talk. It’s sure to be fascinating.