A big thank you to all of you who have renewed your memberships over the last couple of weeks. As I outlined in my March column, your memberships have allowed us to continue to provide an interesting but regrettably more limited programme in the last two difficult years. We anticipate, as the restrictions on our events ease, providing a really exciting programme over the next twelve months. The committee’s events team now meets four times a year to map the forward programme and there are many great ideas being explored. Reading the newsletter will keep you up to date as these come to fruition.

I thought I would also touch on a cooperative venture which you may have missed but which promises to be exciting for the Friends and the city. Across Wakefield Street from Te Papa, Tākina, the Wellington Convention Centre, is taking shape. It will have venues for large and small gatherings as has Te Papa. Many areas of cooperation are being explored between the two institutions. Te Papa has developed expertise in booking meeting spaces, catering, exhibitions, all of which also will feature in Tākina.

‘Te Papa’s venues and Wellington’s new convention centre are set to be operated together, as the $180 million Tākina project takes shape…..Wellington City Council has proposed a preferred operating model for Te Papa’s venues and the Tākina venue to be operated together under a new trading name “Tākina Events”…The new operating model recognises the potential to co-host events across the two adjacent and complementary venues rather than have them competing against each other.’

Te Papa itself is going through a quiet period at the moment for obvious reasons. That gives you, as Friends of Te Papa, an opportunity to explore the museum in reasonable quiet. I like to try and find areas that I have not been to before, or spent much time in, such as the Polynesian displays with their traditional cases of artefacts and the great videos of Polynesian New Zealanders talking about what it was like to come to New Zealand. Some remember the dawn raids and the difficulties of adjusting to life in their new country. 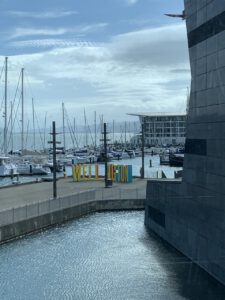 Then as far up as you can go, there is the roof garden and a display of ceramics. There is the photographic gallery. Near all those there are places to sit and think about what you have seen and heard. You might like to take a long look at the Te Tiriti o Waitangi display. The wording of the Treaty is interesting. You might want to have a good think about the preamble to the three articles of the Treaty. What was the motivation for the Crown to want a treaty? In that preamble the Treaty makes reference to the Confederation of the United Tribes whose flag was the first New Zealand flag which still flies in Northland. So the signatures to the Treaty involve two sets of chiefs, the Chiefs of the United Tribes and then other chiefs. What was the history behind this distinction and why was it important at the time?

Museums are places for contemplation and reflection, and then there is the café.