Handmade with the heart

The next time you see a Bollywood movie, spare a thought for the lead actress as she runs helter-skelter down the road. Her gorgeous costume is no lightweight replica made for the screen. It’s likely to be the genuine article with intricate and heavy embroidery of metal and crystals that’s taken maybe six months to create.

In their third presentation, ‘Old is New’, in the Friends’ Indian Textiles series, Shani Pillai and Joji Jacob took us on a visual extravaganza looking at how traditional embroidery techniques, crafts and textiles are being honoured and kept alive in a globalised world. 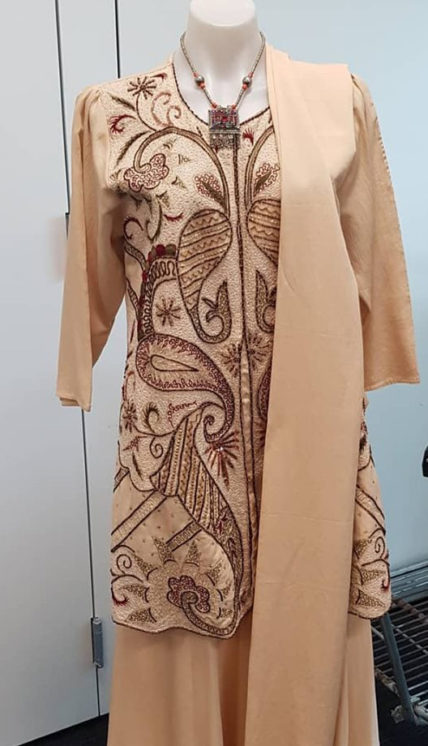 They also took us into some wonderful social enterprises and community initiatives that are not only nurturing these skills but giving women, in particular, a secure livelihood and freedom from exploitation.

Shani says Bollywood has been great for artisans. Indian brides see elaborate outfits on screen and want something similar for their own weddings.

A complex piece may have more than a million handmade stitches. For a Bollywood design up to 100 men could be working on the same garment, some doing the metal work others working with crystals. Traditionally men do this sort of embroidery.

While wedding outfits tend to be traditional, internationally recognised designers are also using traditional techniques and textiles to create modern pieces, a kind of fusion fashion. International fashion houses also take what has been made in India and incorporate it into their garments.

At the heart of Shani and Joji’s passion for Indian craft and textiles lies a commitment to social transformation. Through their travel business they connect their clients with artisans working in a range of social enterprises.

Earlier this year they were asked to arrange a five-day trip for staff from Chanel. They negotiated that part of the package would include a seminar bag designed and made by Freeset, a social enterprise started in Kolkata in 2001 by a New Zealand couple. Freeset works to free women and girls from the sex trade. Through jobs making bags and tees which are sold around the world, women are empowered to take their first steps on the road to freedom.

Shrujan, in Gujarat, is another initiative which Shani and Joji support. Meaning ‘creativity’ in Sanskrit, Shrujan works with more than 3,000 craftswomen across 120 villages, revitalising the ancient regional craft of hand embroidery. The women create a range of beautiful items which are sold in Shrujan shops and through national and international exhibitions.

Shani says as a result of the livelihood provided by Shrujan, which was set up in 1969, many villages now have electricity, roads, brick houses and televisions. In some there are now girls who are college graduates.

Shani and Joji talk about ‘handmade with the heart’. What inspires them is individuals who make it possible for others to develop their skills and achieve freedom and independence.