Two New Zealand artists were the subject of this visit, Maori artist Brett Graham known for his large-scale sculptures and Judy Millar, a painter whose large and spectacular abstracts represented New Zealand at the 2009 Venice Biennale. The first part of the visit looked at three different aspects of Brett Graham’s work. In the main entrance to the gallery a long black woven carpet (shroud), ran the length of the gallery leading to a large “wedding cake-like” structure “iced” with a delicate, carved, wallpaper pattern. 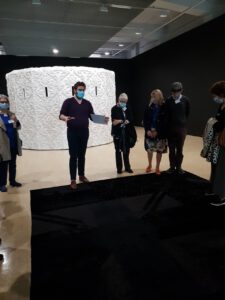 The Black Shroud, Purutapu Pouriuri, rather beautifully records the names of some of the British regiments that fought in the Taranaki wars. The mood is sombre rather than celebratory. The wedding cake (O’Pioneer) has apertures suggesting a defensive military structure rather than a time of happy celebrations.  O’Pioneer recalls the gunboat Pioneer commissioned to travel up the Waikato River to intimidate Waikato iwi. After the war the turrets were dumped at Mercer and Ngaruawahia as a reminder that the British troops had won this battle. The icing perhaps suggests the civility overlaying the military might upon which power was based.

In another work, Maungurongo ki te whenua Maungu ki te whenua, a pataka (carved food storage building) is being carried on a giant two-wheeled wagon, as seen in our main image.  The allusion here is to the way in which Maori and Pakeha also helped and benefited each other with food and technology despite being at the same time in a war over the right to occupy land.

There were other works in the original exhibition at the Govett-Brewster Gallery that were too large to bring to Wellington but these two works referred to were supplemented with films recording the wild Taranaki coastline and the advent of the oilfields and discovery of natural gas offshore. The sculptures add to the current revision of our history taking place across the arts, through the Waitangi Tribunal process and in a richer understanding of our troubled past.  It is a story of violence, suffering and pain but also of apology, redress and hope for the future.

Upstairs Judy Millar’s paintings were presented in two separate spaces. In the first space were three mural-sized paintings in hot reds and pinks. One wondered how works on such a scale were executed. Part of her technique is to place a lot of paint on the canvas and then with her characteristic bold sweeping movements remove rather than add to it, the reverse of more orthodox techniques. The effect is very dramatic and vital, imbuing these large works with delicacy and luminosity.

In the second space seven portrait format paintings (ie taller than they are wide) were hung in a line and were painted in more subdued colours.  Millar’s works are challenging in a different way to Graham’s in that they are not about reinterpreting our understanding of the past but…“offer new ways to see, perceive and feel in order to be part of adaptive human evolution”.

With both artists our understanding of the artists and the works on display was enhanced by the excellent written explanations on the gallery walls. In addition Caleb Gordon from the gallery staff was very helpful in answering our questions about the exhibition.

All images courtesy of Liz Medford.