Furniture can reveal personal stories that unfold through acquisition history. A particular pair of modernist chairs originally owned by artist E. Mervyn Taylor and his family tell a fascinating story. Curator Justine Olsen shares the story with us in advance of the upcoming ‘Modern Living‘ exhibition in Toi Art.

Ernest Mervyn Taylor (1906-1964) was active in Wellington during the mid- 20th century. As an artist his delicate prints filled the pages of publications; they were displayed too in exhibitions including Auckland’s Art & Design exhibition of 1952. 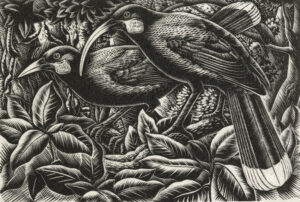 Taylor was involved with the School Journal during the 1940s, illustrating drawings and woodcuts featuring New Zealand flora, fauna and Māori mythology. Originally a jewellery engraver, Taylor moved to print making which was an important way in creating art that was accessible to the public.

By the late 1940s Taylor was editor to Architectural Centre’s publication New Zealand Design Review. The Wellington publication focused on discussions concerning urban planning including the renewal of Te Aro and experiments in architecture including the construction of Demonstration House in Karori. Furniture featured too. Enormously important to architects, it helped reinforce contemporary ideas about materials and processes while providing challenges around the immediate physical needs of people. Furniture like objects, art and architecture were seen as equal in value, a notion influenced by the Bauhaus movement.

It was during Taylor’s time as editor 1949 to 1952/3 that he may have purchased the Easy chairs. A year earlier the chair form was featured in the New Zealand Design Review.  Unusually the designer or manufacturer is not identified but research continues into this particular mystery.

The chair from the description shows the importance of the industrial process through the use of ‘cut-out boards’ and webbing. The form became widely photographed in numerous architecturally designed houses of the period. For example early photographs of Henderson House, Alexandra, designed by NZ/Austrian architect Ernest Plischke with Cedric Firth in 1950, show this form very clearly.

You may wonder why the Easy chair form was so characteristic of this period. It was a form that expressed the epitome of informal and urbane living; its portability allowed it to be moved easily within the modern open interior and it showed new ways of working in materials and process, well removed from traditional forms. Recently we’ve been looking at the chairs and their upholstery. The upholstered cushions have been recovered twice, suggesting that the family found the chairs very important in their lives. The image to the right shows the original brick coloured textured weave, followed by a lighter woven plaid fabric then a turquoise cotton as the most recent layer which has been unzipped for this photograph.

Textured fabric was important during this time. Woven cloth helped to underscore the importance of the modernist view of honesty in design and manufacturing – the idea that the material and construction remains visible to the viewer and not concealed.

The chair’s upholstery tells another story too, that they were loved and used by the family for about 50 years until their gift to Te Papa. 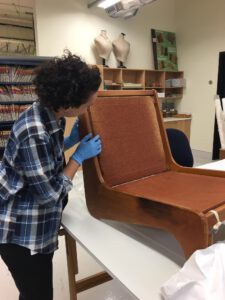 While we are looking at the fabrics, we would love to hear from you regarding any help to date or name the fabrics.