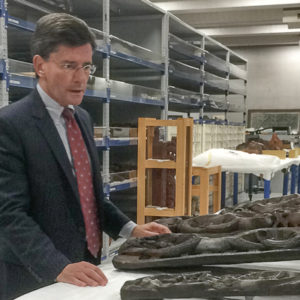 On Friday 4 July Hon Chris Finlayson, Minister of Arts, Culture and Heritage, and Minister for Treaty for Waitangi Negotiations, visited Te Papa to present the story of the famed Motunui Panels to media. These late-18th century carved pataka panels are of immense cultural and historical significance and have returned to New Zealand after more than 40 years.

In March, the Ministry of Justice’s Deputy Secretary Treaty, Kevin Kelly and I travelled to Geneva to meet the family who held the panels, and negotiate their return for use in Treaty settlements. The Ortiz family entered into good faith negotiations with the New Zealand government, honouring the memory of their father George Ortiz and his desire to see the panels returned to New Zealand. The panels arrived at Te Papa last weekend and will remain in Te Papa’s care for the time being.

The Motunui Panels are of Te Ātiawa origin and will return to Taranaki as part of the Treaty settlement process. The panels are rich in history and have an extraordinary story on an international scale.

The panels were carved before 1820 by Te Ātiawa artists and were most likely hidden in a swamp during a period of inter-tribal war for safe keeping. They were recovered from a swamp near Motunui in Taranaki in 1972. The panels illustrate the ariki (chiefly) lines of Taranaki, depicting tribal unity and mana and have a known whakapapa. In 1984, the panels were described by Dr John Yaldwyn, the then director of the Dominion Museum, as “the single most exciting unit of the now extinct Taranaki carving style,” and a “true masterpiece of Maori art.”

Shortly after their discovery in 1972 the panels were illegally exported out of the country without the knowledge of the government. They were later sold under falsified documents of provenance to a private collector, George Ortiz.

Over the years, many people have made a contribution to the final return of the panels. More recently, Professor Steven Hooper of the Sainsbury Research Centre at the University of East Anglia was pivotal in assisting Kevin Kelly and I with the negotiations.

Thank you to the Te Papa team who have helped to facilitate and support the return of the panels and to those who are now caring for the panels.

This story highlights the importance of protecting our taonga and connecting taonga with its communities to ensure that future generations have the opportunity to fully understand and experience their heritage and history.

View the ONE News features starring our own Rhonda Paku, Deputy Kaihautū

Feature image above:  A detail of a panel in Puke Ariki thought to be closely related to the returned Motunui panels.