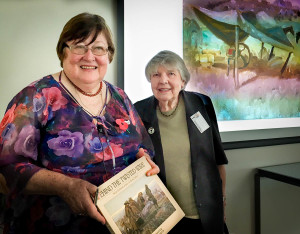 The Friends recently welcomed Jennifer Haworth to help her celebrate the launch of her latest book –  Behind the Twisted Wire: Stories of World War I.

Jennifer is a writer and historian with an impressive list of books and publications to her name, including several historical novels. In 2008, she wrote and published the best-selling The Art of War, which looked at five New Zealand official war artists and their depiction of the New Zealand experiences in the Second World War.

In her new book, she has turned her attention to the First World War. Although the first official war artist was not commissioned until 1918, Jennifer looked at how those who had volunteered as soldiers recorded their experiences of the war in the trenches. Her talk concentrated on two of these men, Nugent Welsh and George Butler.

Nugent Welsh was a well known Wellington artist when he left for the war in 1915. He continued to exhibit at the New Zealand Academy of Fine Arts while in the trenches and, until he became an official war artist, was able to sell everything he painted. Both Welsh and Butler were devout Christians which is reflected in many of their paintings and although it was a convention not to paint dead soldiers, Welsh often painted graveyards and gravestones to depict the futility of war.

George Butler arrived in New Zealand in 1881 aged 9 but sailed to Britain in 1905 never to return. He taught in Dunedin and also at Clifton College in Bristol where a lot of his work is still held today. In 1918, after three days’ training, Butler was commissioned as a captain and sent to the Western Front to make sketches and drawings of soldiers and their activities. One of his paintings “The Stretcher Party” depicts four New Zealand soldiers carrying a German; an illustration of the compassion soldiers had for one another.

As Peter McIntyre once wrote “To record it in paintings and drawings, to have a visual record of a vital part of New Zealand and world history is to ensure that the tragedy and experience are not forgotten”.

Behind the Twisted Wire: Stories of World War I is available at the Te Papa Shop on Level 2 or you can purchase online.