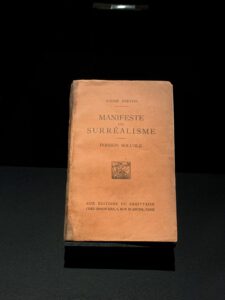 Expect to be surprised, even disturbed!

This rich exhibition is challenging and wonderfully engaging if you give it the time it deserves.

Before my visit, my knowledge of Surrealism was limited to Dalí’s paintings of liquid clocks draped in bizarre landscapes and Magritte’s works capturing crisp building facades or men in dark suits wearing bowler hats.

A total rethink was required. Instantly I was thrown into another world. Many mediums are featured, from furniture and sculpture, to illustrated books, photography, collage, poetry, music and film clips, as well as familiar paintings.

In her talk to Friends of Te Papa, art curator Lizzie Bisley eased us into the background of this often unsettling surrealist movement. World War 1 had brought total chaos. The Dada movement sprung up rejecting the norms of a capitalistic society and traditional art. Surrealism pushed this direction still further, breaking away from the status quo. The Surrealists wanted an extreme and urgent change. To get there, they plunged into the unconscious, imagination and dreams, embracing irrational and sexual desires.

In 1924, André Breton published the first Surrealist Manifesto in Paris. The Bureau of Surrealist Research also opened in Montmartre. Artists and writers met there, playing games, experimenting with drugs, recounting their dreams and trying group hypnosis. The public were invited too, gathering information for archives, expressing the unconscious activity of the mind. Far from being artists alone in their garrets, this movement was collaborative and co-operative.

Now for the Te Papa exhibition…
Some unexpected jewels for me were:

There is even the opportunity to register and file your own dreams. Linger and question. Be warned, it is far more than a romp through Monet’s garden!

Thanks to Te Papa, the Museum Boijmans Van Beuningen and organizers for bringing together such a dynamic and stimulating collection representing this controversial movement.