David Alsop admits he has “lived and breathed” Ans Westra and her work for the last fifteen years. In his talk to the Friends he gave a fascinating account of this close personal and professional relationship.

Through his gallery ‘Suite’, he has managed Ans Westra’s work, starting by selling her prints and going on to work with her and her family to preserve her legacy and develop access to the work in the modern age.

From the 1960s Ans relied on freelance documentary photography work. David estimates that there are over 300 publications where her images appear but only about five that she would say are ‘her’ books. 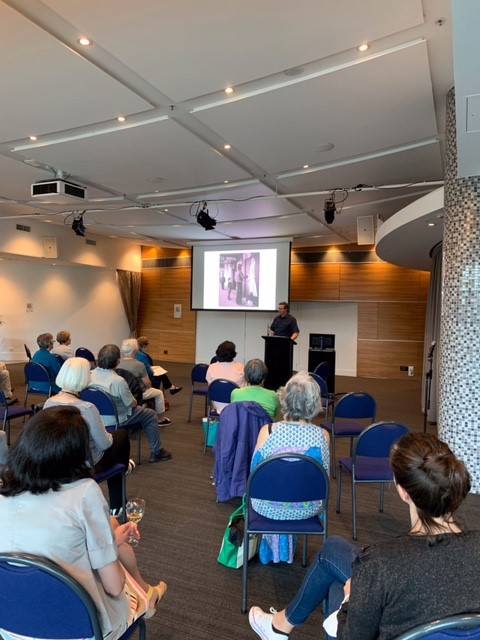 “Ans just spent her life photographing. She had no time to catalogue.” As he worked more closely with Ans, David realised he needed to help with organising the work.

In 1982 Ans passed her negatives to the Alexander Turnbull Library. In 2012 David helped her update the agreement with the Library. Since then, through Suite Tirohanga, the company formed to manage the archive, David and his staff have catalogued and digitised 80, 000 images. This opens up access to the photos.

Since 2004, Ans has not made her own prints. David had to find a modern way to produce them. The scans made two files – a small one for online use and a high resolution file for quality prints. David has worked on protocols to manage the modern prints and access to the archive. He considers people who have been photographed (and their families) should have access, protected through licence agreements, to their images.

For the future David sees Suite continuing to show images and background information on the Ans Westra archive. He would like to present her work in a venue “on the tourist trail” near Te Papa and to see a single online portal for her work, maybe on the National Library site.

As Ann Walker who thanked David on behalf of the Friends said, this was an informative and heart -warming presentation.