A group of 19 Friends of Te Papa members, led by geologists Hamish Campbell and Chris Adams, spent 5 days exploring the geology of North West Nelson, based in comfort at the four and a half star Ratanui Lodge in Golden Bay. The visit centred on geological structures which illustrate how the area sits within the Western part of the largely submerged continent of Zealandia. The geology was fascinating, the food was tasty and abundant, the company congenial and the weather was perfect at the start for a helicopter mountain ride, moving to moody cloud and mist towards the end that provided just the right atmosphere for a dinosaur print search.

Day 1: From Ligar Bay we passed through spectacular coastal cliff topography of 25 million years old Takaka Limestone before walking along the beach and examined 120 million years old granite from the Cretaceous Separation Point Granite – the ‘granite belt’ that separates the Eastern part of Zealandia from the Western Province of Zealandia. On the way back to Ratanui Lodge we stopped at the Abel Tasman Memorial.

Day 2:  From Takaka Airport we were airlifted in groups of five by helicopter to the top of Parapara Peak. On both the ride and the peak we were able to take in the spectacular views, alpine flora and the rocks. These included a quartz sandstone about 200 metres thick that accumulated in a river valley, black Pariwhakaoho Slate, about 30 metres thick, and 35 metre thick Tarn Sandstone. We helicoptered back down the mountain and were back at the Lodge in time for lunch. 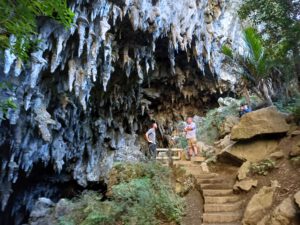 In the afternoon, we headed to Motupipi, to walk to Rawhiti Cave which is a DOC reserve. Those who eachd the top saw an extensive high overhang (rather than a cave)  with spectacular stalactites. On the way home we stopped at Kiwi Spirit Distillery to sample their gins.

Day 3: We drove up the Takaka Valley to Upper Takaka and to Cobb Valley, stopping at Sam’s Creek which hosts gold-bearing granite and is considered NZ’s most significant untapped gold mine. We moved on to Cobb Power Station with a look through the operation and then drove over the hill to Cobb Lake and the Cobb Dam. The Cobb Valley is a classic U-shaped valley carved by glaciers during successive ice ages over the past 2.6 million years.

We drove back to Upper Takaka (25 million year old Takaka Limestone again) and on up to the top of Takaka Hill, crossing the Pikikiruna Fault on the way and into Ordovician Arthur Marble (about 450 million years old). We then walked through Ngarua Caves to see the magnificent stalactites and stalagmites developed within caverns in Arthur Marble. On the way back to the Lodge, we stopped at Golden Bay Museum. The Museum had kindly kept the latest exhibition of old photographs of Takaka open for us and explained them.

Day 4: The next adventure was Farewell Spit. We had time on the way to explore the old settlement of Collingwood and on the drive to the Spit saw white herons and a Royal Spoonbill. Then it was onto a Farewell Spit Tours bus configured to manage the drive right out onto the spit itself.

First we stopped at Fossil Point cliffs at the very base of Farewell Spit on the open ocean and saw sandstone, conglomerate and siltstone of Palaeocene age (66-55 million years old). Some of us saw trace fossils (burrows of marine organisms) and some shelly fossils in blocks of siltstone on the beach. The drive then took us to the Farewell Spit Lighthouse, stopping here and there to observe birds (Gannets, Gulls), dead fish, Fur Seals, storm debris (logs, kelp) and sand dunes.

We had lunch at Farewell Spit lighthouse keepers house which was first lit 17 June 1870, drove for several kilometres beyond the lighthouse and then headed back to Puponga and on towards Cape Farewell. At Cape Farewell there were spectacular views of cliffs and seascapes.

Day 5: We headed west again towards towards Collingwood to Devil’s Boots where we saw remnants of river-worn Takaka Limestone. We drove on through Rockville to Bainham to see the site of a swing bridge wiped out by flooding in 2010 together with a spectacular gorge developed within basement rocks and with Takaka Limestone cover rocks exposed nearby. 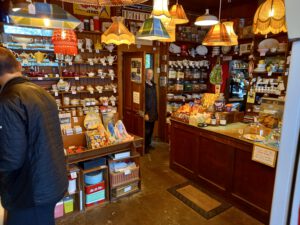 On the way back to Bainham we looked to the East towards the Quartz Hills, the scene of NZ’s first gold rush in 1857, and heard about planar surfaces in the landscape, associated with the sinking of Zealandia and the uplift of New Zealand. Alluvial gold was won from river gravels resting directly on basement rocks of the Buller Terrane. We stopped at the old and picturesque Langford Store and Post Office, which has been operated by the Langford family since 1928 where we were welcomed by owner Sukhita Langford and coffee/tea/hot chocolate and scones. As the rain poured down outside, we heard about Zealandia, the New Zealand ‘continent’, using the Zealandia Map Posters published by GNS Science in early 2020, and the reasoning for thinking of it as the 8th (geographic) continent.

We were also fortunate enough to meet local farmer Ben Riley who is credited with being one of the party who discovered the very old Anaweka waka with the turtle motif carved on the bow, in a stream near the coast S of Whanganui Inlet (see Johns et al. 2014). The waka is currently being cared for by Fonterra in Takaka. The turtle carving indicates the likely tropical origins of the canoe.

It was then back to Collingwood, in the rain, with lunch on the bus, time for another coffee and a drive through to the South end of Whanganui Inlet and the search for the dinosaur prints, and excitement when we found them! These trace fossils are interpreted as being dinosaur footprints of about 70 million years old. We also saw coal within the sandstone/siltstone sequence. The coal-bearing cover rocks in NW Nelson are/were of great interest to the petroleum exploration industry because they are on-land examples of the very same formations recognised at great depth in the Taranaki Basin, and therefore the source rocks of NZ’s productive oil and gas resources.

Day 6: In the morning we returned to Wellington, slightly delayed and split into groups travelling by different aircraft at different times, due to fog.