Co-governance or shared authority. Where are we now? The question posed by Dame Dr Claudia Orange in her recent talk to the Friends. As she said, a difficult topic for a lot of people to take on board. Sharing authority has been a problem for iwi and government to negotiate from the time of Hobson in the 1840s until this day. The Treaty was, and is, a significant document and it was seen as that at the time.

She noted that success in history is not the preserve of one person, but of many who have contributed a range of work. The time of her involvement (the past 30-40 years) has been an exceptional period in which to write about a serious topic, and one that has seen a framework put in place to address past government issues. It has been really challenging for people to understand and cope with the changes over that time. Claudia spoke of the 2019 He Puapua report, which ‘states that the purpose of the declaration is to provide a roadmap to achieve a “Vision 2040. Land settlements will take until the late 2020’s, with the aim to be complete by 2040, the bicentenary of the signing of the Treaty of Waitangi.

Former Minister of Treaty Negotiation’s Chris Finlayson wrote that “’Co-governance’ has become a term that people don’t understand. They think it means co-government. People who are frightened by co-governance think they’ll be locked out of access to our natural resources, for example. What it really means is involving iwi in myriad of decisions that can actually result in a better country”. Moving towards true Treaty partnership does cause unease with what to many of us is ‘new thinking’ – examples being the changes to Health on 1 July this year, and proposed changes to management of drinking water, storm water and waste water. 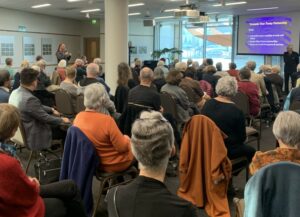 Claudia said that much depends on us, the public, now for the Māori and Crown to work together in partnership. Slides from presentation added detail as she spoke; some explained how Te Arawhiti, translating to ‘The Bridge’ was set up. It’s website states: ‘One of the responsibilities of the Māori Crown Relations: Te Arawhiti portfolio is to ensure that public sector engagement with Māori is meaningful.’

It will take a while to see how things will work, and it will be inter-generational for the effects to be measurable. Claudia also spoke of how Universities and Law Courts, for example, will extend knowledge to include Māori tikanga and concepts and knowledge of Te Ao. The Labour government is putting Aotearoa New Zealands history into Year 1-10 classrooms to be taught as a compulsory part of the school curriculum from 2023. Claudia reflected that these changes will mean that a new generation will grow up with a unique identity.

It is over to all of us to go on talking, as together we are a Nation, as was seen in the Treaty promise of 1840 between 2 peoples. Government, in a democracy, must have the support of the public. Claudia concluded that it is challenging when trying to do things that are right when there is no precedent to follow. An example here was the Māori response to Covid-19 at a time when all of Aotearoa felt under threat, and was adapting to what we needed to do, but when they have the terrible memory of the flu pandemic of 1918/19. She quoted Eleanor Roosevelt ‘the future is ours’. 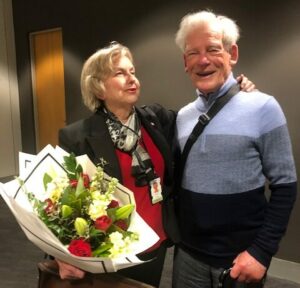 Dame Claudia has been a good Friend to us, and a valued member of Te Papa’s research team. We will miss her, and we wish both Claudia and Rod all the very best in their future, and thank her for making the time to give us such a wonderful talk.