This was the second of Shani Pillai and Joji Jacob’s Textile Talks, timed to coincide with the WoW festival. We were to learn the many intricacies of the renowned and centuries-old Ikat weaving that is practised in India, much of South East Asia, Japan and other countries.

Shani explained that “Ikat” is a Malay word that means “tie” and refers to the tie and dye of the yarns to create the pattern required for the fabric.  This is achieved by binding individual yarns or bundles of them with tight wrapping, which after dyeing will result in the required pattern for the fabric. Only then does the weaving begin.  It is a laborious process especially when bindings have to be changed and re-dyed several times.

Patterns and colours chosen can be significant.  Animals usually represent status; Indian designs can feature flowers.  Islamic patterns will never feature animals or human beings.  Colours can represent identity – can show which village you hail from. 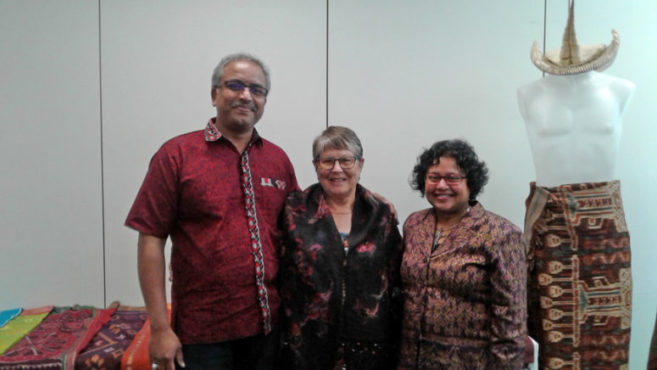 The Double Ikat is the most difficult style to accomplish and the most expensive and time consuming. An example is the Geringsing weaving produced in East Bali.  Garments made are used for special occasions.  The distinctive colours come from traditional dyes such as turmeric, indigo and red from mulberry trees.

In Patan, Gujarat, (India) we find the much esteemed Patan Patola – another example of Double Ikat production.  Producing this fine silk is time consuming and extremely expensive and requires the most talented artisans to design and then make the complicated designs.  It takes at least six months to a year to produce a six metre sari.  Of course only the very wealthy could afford to buy one.

Videos showed the humble, super-talented craftsmen at their handlooms, and also illustrated the ancient maritime trade routes through India and South East Asia.

Fabrics (examples of Ikat weaving) were displayed on tables for us to admire.  Also, mannequins draped with sarongs and shawls were striking.  These were collected by Patricia Tankersley when she lived in South East Asia and have been donated to Shani and Joji.

This was a well presented talk by two experienced communicators.  Their infectious sense of humour soon relaxed the audience resulting in a truly enjoyable and informative event.  It was nice to mingle later with the refreshments and meet some of the out-of- towners visiting Wellington for WoW.