A tour to the heart of Te Papa 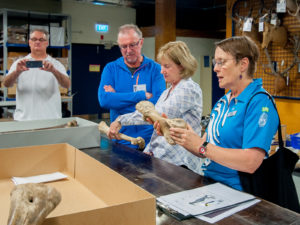 Two events in early February gave Friends an opportunity to get a close look at the collections behind the scenes of the museum.  We explored the main museum site in Cable Street and the storage facility in Tory Street.  The tours which are designed for small groups only, have been recently introduced as a regular offering to visitors to Te Papa.

The term storage facility belies the fascination and importance of the collection that is found ‘behind the scenes’.  Storage is  too passive a word to describe the care and respect that is given to nurturing this precious taonga. We quickly found that the collection is the heart of the museum, the essential centre that informs what visitors see ‘in front of the scenes’, and supplies the energy and authority to researchers both within the museum and further afield.

The Te Papa staff at each location had a deep knowledge and enthusiasm for relating the objects to their historical and cultural context, in a way that brought them to life.  They talked about how when and why the items came into the collection, and the way that they are being used to support reference and research.

Judith began the tour at the feet of the mounted moa that many still remember from its pride of place on the brown lino of the Dominion museum in Buckle Street.  Today it would not meet the standards of accuracy required; the birds would have typically held their long necks pointing down at the ground, never upright as we saw.  But the object now carries with it the history of the museum and the history of collecting practice more powerfully than its attempts to show us what a moa might have looked like.

And in the mammal rooms, mounted heads on the wall give us the impression of having walked into a hunting lodge.  Bison, moose, deer, and wild pig jostle for position, overlooking a stuffed tiger, who is said to have arrived at Buckle Street from the Wellington Zoo over 80 years ago (and looks every bit of his age).   But it is the less visible, and arguably less striking collection of hundreds of skeletons of kiore (Pacific rats) that comprise the valuable research collection, as carbon dating of their bones and woody seeds with tell-tale rat bite marks, has helped establish the arrival date of the first humans to reach New Zealand.

The endemic bird collection is in a sealed room across the corridor from the mammals.  The temperature and humidity are tightly controlled, and there just a hint of a remembered aroma of camphor.  Well protected from mould and moths, the collection of 11,000 New Zealand bird skins, from 289 species, is the largest collection held by any museum, and a vital resource for scientists studying live birds.  It includes type specimens that are used as the definitive reference for their species.

At Cable Street, saw a similar approach to maintaining a reference collection of botanical specimens – 285,000 dried plants, with a focus on those native to, or introduced to New Zealand.  Of particular historical interest are some specimens from the large collection gathered on James Cook’s first visit to New Zealand in 1769.

Cook was accompanied by botanists Joseph Banks and Daniel Solander.  They collected several thousand specimens on the voyage, with Banks and Solander requisitioning the use of the captain’s cabin for their preparation and storage.  The specimens returned to England on the Endeavour, and were held in Banks’s private collection until they were donated to the British Museum in 1827.  The samples that we saw were from a selection that were subsequently donated to the Colonial Museum in Wellington in 1895.

The Cable Street tour also covered the Pacific collection.  Phil showed us collections of Hawaiian feather cloaks, and explained the significance of the colour red that signified the high status of the wearer.  These Pacific traditions were carried over to Māori weaving, with materials and dyes being adapted to use what was available in this cooler climate.  We saw hundreds of tapa cloths, carefully wrapped rolled and stacked,a collection of carved seagoing vaka models showing the development of designs from different islands, and a formidable range of weaponry used in hand to hand combat throughout the Pacific.

We also learnt about the trade that developed in ‘souvenir’ developed weapons, and Phil showed us how an expert could tell the difference between these and the ones built for battle by the heft and balance of the ‘genuine’ object.  It’s the sort of observation that needs the object close to hand.

The experience brought to mind a quote by Nicholas Thomas, an anthropologist and historian who is  the Director of the Museum of Archaeology and Anthropology at the University of Cambridge.

Thomas is very familiar with this part of the world, having written books on the voyages of James Cook, as well as numerous publications on Samoan tattooing, Māori carving, and Oceanic art.  The quote is from a recent book with a wider theme.  In The Return of Curiosity: What Museums are Good For in the Twenty-first Century he says …”In whatever form, via whatever technique or practice, the activation of the collection is the museum’s beating heart.”

Find out about future Te Papa behind the scenes tours here, and  more about the 800,000 items stored at Te Papa in the Collections Online site here.

Feature image:  Inside the Pacific Collection area. Phil points out a few of the many different fighting weapons in the collection.  (Photo credit: Bill Beale)