It didn’t take long for 34 Friends of Te Papa to come face to face with the city’s earthquake damage. Our hotel, Chateau on the Park designed by Peter Beaven in 1972 as a Gothic Revival whimsy, had escaped major damage, but the grand entrance was closed and we slipped through a side door into a temporary lobby. Just one of countless stop gap arrangements all over the city, something that was brought home to us that evening in a lively talk by Anna Crighton, President of Historic Places Aotearoa Inc.  It’s not only cathedrals that are difficult to sort out.

Next morning, the scale of the damage to the central city was overwhelming.  In a Beyond the Cordon bus, we just fitted amongst rubble-filled demolition trucks rumbling along barely recognisable streets between empty blocks inhabited only by tall straggly weeds. A glimpse of High Street saw it still blocked by bricks and concrete awaiting a decision about restoring facades. Some new buildings were also set for demolition to fit in with revised plans for the city centre.  Later our tour bus took us as far as Sumner where the wrecked houses along the cliff tops silenced us all.  Along the river, streets of broken houses told the sobering story of how lives had been turned upside down. We’d heard some of these personal stories in a documentary at Quake City, a moving display put together by Canterbury Museum combining myth, history and rescued artefacts.

Yet, against this backdrop of devastation there was also much that was uplifting.  The Christchurch Art Gallery is closed but its patrons haven’t been abandoned.  An Outer Spaces series of large works on the outer walls of the gallery and the adjacent area, shouts that art is still part of city life.  So did the temporary installations erected in vacant lots around the city. Particularly poignant was 185 Empty Chairs, in which rows of white painted chairs, each one different, represent the unique individuals who died. That afternoon Peter Majendie, who created the work, was busy tidying up and cleaning the chairs, a task he undertakes most days.  At Re:START Mall the mood was bright and bold and there was a long queue for the hearty lunches at Hummingbird Cafe, a sculptural assem-blage of containers. 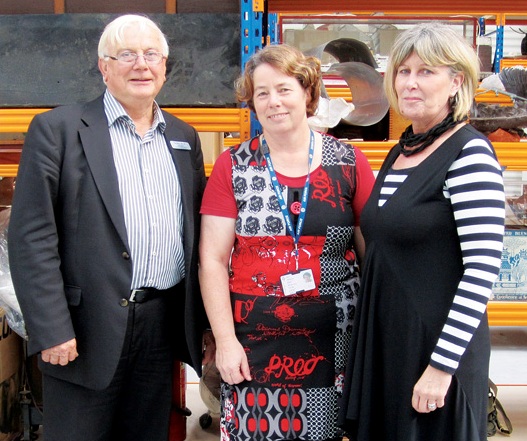 Later on, College House provided a welcome haven.   Designed by Sir Miles Warren in 1964, with some later additions by Alec Bruce, this gracious residence for university students is famous for its Alex Baird Art Collection, which we viewed with the help of experts.  Bursar David Matheson explained that the paintings are not labelled because College House isn’t a gallery, rather it is home to the students who live there. We also felt right at home eating a splendid dinner, prepared in a kitchen marquee. Yes, even here, parts of the campus were damaged.

Next day after a visit to Canterbury Museum to view Scott’s Last Expedition we set off for Wigram Airforce Museum, where Director Thérèse Angelo, showed us around the vast Canterbury Collections Recovery Centre where row upon row of shelves are filled with items rescued from Lyttelton Museum and other local museums and galleries, including College House. Friends of Te Papa has made a donation to support a Museum Intern carrying out conservation and cataloguing.

On our way to lunch at Melton Estates Winery, an abundance of scarlet schizostylis in the roadside drains took the fancy of our gardeners. Some even dug out roots to take home, a bright reminder of a city that is slowly but surely recovering.