Insects and deep sea fishes from Te Papa’s storage facility? Who doesn’t want to see that? When Friends of Te Papa had this event come up, I was keen. Such a magnificent facility – world class in many ways.
I was in the group that got to listen to insect specialist, Dr Julia Kasper, first up.

Dr Kasper’s enthusiasm and passion for her subject material was a perfect introduction to some insects that have an equal enthusiasm for their human hosts. We got to take a closer look, via a microscope, at bedbugs, mosquitos and glowworms – three of Dr Kasper’s favourite insects. 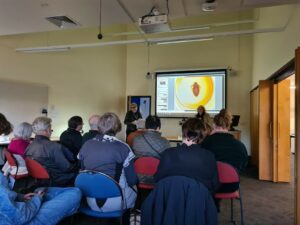 Dr Kasper told us about some history of bedbugs from the Great Fire of London almost extinguishing them to immigrants taking them to the USA. And despite some things like vacuums and even DDT being used, they’ve managed to cling on and continue their close relationship with humans, evolved from cave times.

So while Dr Kasper might not have convinced me that bedbugs are a great thing, she did a lot to change my mind about mosquitos. She showed us some mighty New Zealand specimens. We have 13 native species and most of them do not bite us. Learning about some of those was great fun and we were all very engaged. For example, we have a mozzie in some hot pools and biochemists are keen to know why proteins are not affected by the heat. Mozzies have evolved to bite seals here – and they may also bite us. But not many of the native species do that. If a mosquito bites me, it is highly likely a foreign imported mozzie and I will continue to slap them.

Glowworms have always mesmerised me whenever I have seen them in the bush.  Dr Kasper told us about the bioluminescence they use and how it differs chemically and is produced in different organs from other creatures that use the same parallel evolution. She’s involved in collecting them from over New Zealand for research. 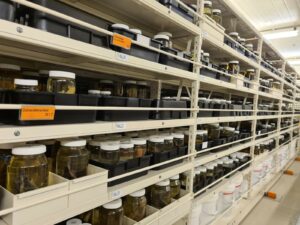 Our time with the insects was up far too quickly and we were swapping with the other group to join Andrew Stewart in the storage facility to look at the deep sea fishes section. After some health and safety discussion, we were off looking at vast arrays of specimens in jars of alcohol and some of the large tanks with bigger specimens. They have over 90,000 jars and over 100,000 litres of alcohol to preserve them all. While our collection is small on a global scale, it is the biggest in New Zealand. And the large tank area is world class. The whole facility has vapour control and special equipment to raise lids on massive storage tanks. All fascinating.

In a great crossover with Dr Kasper’s talk, bioluminescence is the key to communication in the dark depths of the oceans. Andrew explained how light is used to attract prey and potential mates and have evolved many different ways, similar to the diversity in insects.

Keep an eye out for future Friends of Te Papa events because touring around such amazing places of science and listening to experts that love their fields of study is such a great opportunity and should not be missed.