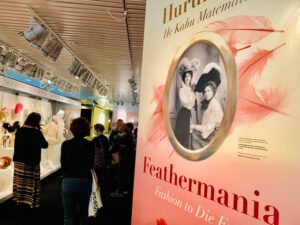 The shop-window inspired display of feathers in fashion on Te Papa’s 4th floor, is a must see if you are interested in late nineteenth century fashion and the part feather adornment played during the period 1850 – 1910, when feathers joined fur as an ‘it’ accessory.

Claire Regnault, senior curator and author of the book ‘Dressed – Fashionable dress in Aotearoa New Zealand 1840-1910’, was involved in the curation of this display and spoke about it to Friends, on Wednesday 7 October 2021. She explained that New Zealand’s native birds were widely prized for their feathers. Huia, tui and little spotted kiwi were used to make muffs, collars, hair pieces and capes. Huia beaks were also made into scarf pins and brooches. The popularity of this fashion coincided with the species’ demise. New Zealand businesswomen (taxidermists and milliners) were largely involved in making these accessories but feathers were also exported for sale to the London feather market.

The items on display are mostly from Te Papa’s collection, with some loaned. They include ostrich feather fans, a swan feather cloak (the feathers were individually curled every year to ‘freshen up’ for the season), pheasant capes, collars, kiwi muffs and a king penguin muff. There is also an extraordinary feather fan with a taxidermy Brazilian hummingbird nestled in the middle. Bizarrely, there was a Paris fashion at the time, for women to attach a live bird to their hair-piece or bracelet for a ‘special occasion’. Not a comfortable outing for bird or wearer.

In the late nineteenth century formal groups were lobbying Government in Britain (and in New Zealand) to stop the feather trade, which was seen as cruel and having a devastating impact on bird life worldwide. Some legislation was introduced here and overseas, to protect birds – effectively clamping down on the sale of feathers. However, the game changer came from women themselves. Leading the charge was the Duchess of Portland in Britain who allowed her name to be used in any way which helped protect birds. Relatively quickly, feathers were ‘out’, helped of course when the outbreak of the First World War created fashion of necessity: simple and less extravagant.

At the end of that war, the feather market in Britain had all but collapsed and so too had the fashion for feathers. Although it’s incredible to see these fashion items on display at Te Papa now, we can be thankful that feathermania was short-lived.