Wellington obligingly set the scene for Adrian Hayes’ appearance at Te Papa.  The southerly blast battering the city he described as “windier than Antarctica” though he conceded it in no way could evoke the lowest temperature he has experienced, minus 60 degrees.   A capacity audience was seated early, the buzz of excitement and anticipation amply rewarded by the riveting address that followed, illustrated by graphic videos and photography.

Having left school at 16 with no qualifications, Adrian credited his extraordinary versatility to having no in-depth specialist expertise but being endowed with “the ability to keep going”.   He proceeded to wow and amuse the audience with descriptions of his exploits as an adventurer: jungle training as a Gurkha, trekking to both Poles, summiting the world’s highest mountains and traversing hostile deserts.

Adrian touched on some of an impressive number of activities he pursues in his down-time.   He explained he considers himself to be a sustainability campaigner rather than an environmentalist, stressing the inseparability of the world economy and society (population growth) from the environment itself.

Adrian revealed personal considerations to be a motivator for his determination to tackle K2, a mountain offering high risk and potentially no reward, with a daunting ratio of one death for every 4 climbers.  At the time he was undergoing a personal crisis involving custody of his children.  “Zero happily married climbers are on K2”.

Situated on the Pakistan/Chinese border, K2 is infinitely more difficult to access than over-crowded Everest.  It takes an 8 day trek just for it to be visible, its sheer steepness “breathtaking and awe-inspiring”.  Renowned for “atrocious weather” the terrain includes barely surmountable ice seracs, near vertical and at times over-hanging walls of ice, and the constant danger of rock-fall and avalanche.

The first attempt in 2013 ended in disappointing retreat for 18 climbers and tragedy for 2 who remained.  When radio contact was attempted from base camp, NZ father and son, Marty and Denali Schmidt could not be contacted.  It is believed they were swept away by avalanche.  The next year the weather cooperated.  The final climb, from camp 4 to the summit took 15 hours with a mere 4 minutes to savour success at the top before beginning the even more arduous descent.  “Getting to the top was optional, getting down again mandatory”.

Adrian acknowledged the vital role of teamwork, the team not the individual being the ultimate champion and concluded with words of inspiration, particularly for the large number of young people present: “It’s not what you achieve but what you become that’s important”. 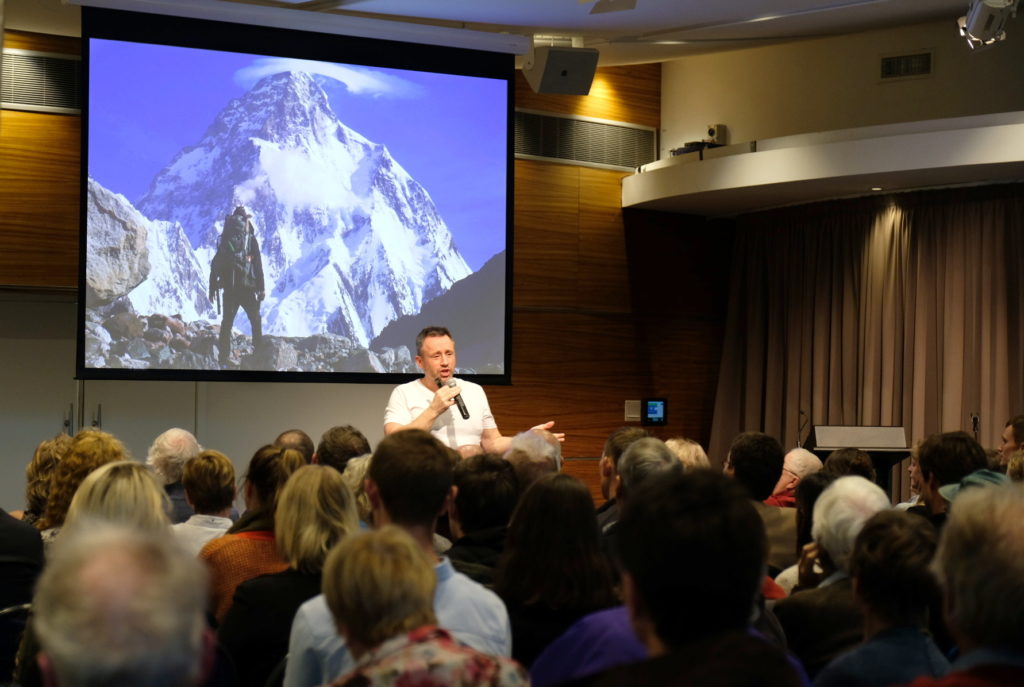