Those of you who are able to attend Ken Gorbey’s talk on the 18th of March hosted by the Friends, or are able to read his book Te Papa to Berlin will know, or come to know that Ken Gorbey thinks that telling stories is what museums should be about. I have been thinking about that the last few months after reading his book. What stories should a museum tell?

Museums all have collections including, in the case of Te Papa, the Miss Universe trophy donated by Lorraine Downes who won it. Some members saw it in a Friends back-of-house tour recently. 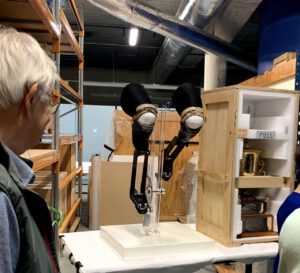 There are so many stories that can be connected to this one object. There is the story of Lorraine Downes herself, her early life, how she won the Miss New Zealand contest and then the Miss Universe contest in St Louis, Missouri, how she met President Ronald Reagan afterwards and then her later life. She tells her story in her book Life, Loss and Love.

Then there is the story of the trophy itself. How was it designed? How was it made?

And then there is the story of the Miss Universe contest itself. There is Miss Universe and Miss World, both begun in the early 1950s. What is the story here? Why do we have such contests at all and why have they survived into the 21st century? Why is there no Master World and Master Universe and isn’t it just a slap in the face of the universe to claim dominion over it without consulting distant planets?

When you next walk around Te Papa maybe the stories presented there will make you think of other stories as well and the stories connected to the contents of your own home.