A group of 22 members of the Friends of Te Papa, including geologist and tour leader Hamish Campbell, travelled to Kaikoura for a five day trip. Full of anticipation at the prospect of exploring some of the geology of the Kaikoura region, we were especially keen to see how the November 2016 earthquake had altered the landscape. Most of us were based at the aptly named Bella Vista Motel with a few staying at the Gateway Motel and we were fortunate on this trip to have Kaikoura Shuttles as our mode of transport.  The geology opened our eyes while the weather, the food and congenial company all contributed to a marvelous few days.

We met at 7.30am at the Inter-Island ferry terminal for the 9am crossing to Picton on Kaitaki.  We were taken by coach to Kaikoura and settled into our accommodation before dining at the Pier Hotel. Hamish had had the task on the ferry of collecting dinner choices and phoning them through to the Hotel which was very efficient in serving us.

Day two was spent exploring the Kaikoura coast up as far as Ward. Two friends of some of our party joined us – one of whom had seen the transformative changes for himself soon after the earthquake – who commented and pointed things out as we travelled north. These first-hand accounts were welcome, giving us a greater insight into how the area had been altered. 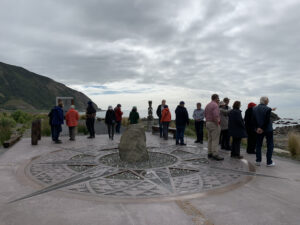 Before leaving Kaikoura we stopped at the historical site of Nga Niho Pa, observing its commanding view and high earth walls. We looked over to the stunning Seaward Kaikoura Range, bounded by the Hope Fault, Marlborough’s most active fault. We learned that New Zealand was formed by rifts from Gondwana and Antarctica and how the nation’s shape and orientation is the result of the moving plate boundary between the Pacific Plate and the Australian Plate.  Hamish told us that the 7.8 magnitude Kaikoura Earthquake started near Waiau, that it rapidly ripped open the full thickness of the earth’s crust, resulting in a maximum uplift of 12 metres. He told of his experience of seeing green lighting in the sky at that time.

Travelling north from Kaikoura we saw that the new highway has not just been repaired but vastly improved with areas of land sensitively laid out to address environmental, ecological and cultural concerns. Our first stop was at Te Ana Pouri headland where we saw basement greywacke rocks and learned that the white stones were actually uplifted bleached coralline algae that used to grow on rock surfaces below low tide. We viewed Maori sculptures and read the information panels. We stopped briefly at Okiwi/Karaka with its standout lobster atop the building housing refreshments. The board walk with its posts connected by thick coiled rope was one example of the changes made that are so in keeping with the environment. 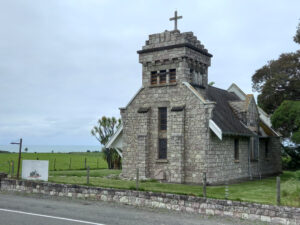 Next we stopped at Wharanui opposite the unique St Oswald’s memorial church, damaged in the 2016 earthquake. Leicester Murray recounted the fascinating history of this private family church, built by his great-grandparents from local Woodside Creek stone, in memory of one of their sons. Before we left we were delighted to see a bellbird at close quarters seeking pollen from a newly flowering flax bush.

We were more than ready for lunch at the Flaxbourne Café, Ward. From there we drove to Ward Beach to look at the pebbles. Lots were white or pale grey and smooth, shiny or polished and are a variety of limestone. Many had lines or marks on them which we were fascinated to learn were trace fossils from living organisms that lived in sediment on the deep sea floor. Other pebbles were darker grey from a volcanic rocks from an eruption about 95 million years ago or were ‘basement’ greywacke with quartz veins.

Our next visit was to Woodside Creek and the K-T boundary (Cretaceous-Tertiary boundary). Some of us did not venture far up the creek, a wide bed of white limestone, deep to cross in places. Most walked on for about a kilometre before reaching the gorge and locating the K-T boundary. Here thick and thin bedding rock is divided by a thin boundary of clay containing a distinctive metal  composition, the result of a meteorite crashing into Mexico over 66 million years ago, creating the Chicxulub Crater and causing widespread extinction.  Back on the bus there were many wet feet!

We continued south across the Clarence River through a pine forest and were told about the ‘Polo Field’ below it created when a farmer agreed to have spoil from road and rail reconstruction dumped on his land as long as it was completely flattened afterwards. At Waipapa Bay we gazed at the sea, a long way in the distance, where, during the earthquake, the Papatea Fault block created an area about 500 metres wide and an uplift of eight metres!  The last point of interest that day was at Ohau Point, known for its Southern Fur Seal breeding colony where we saw plenty of pups and a number of seabirds, possibly shags, congregating on a high rounded rock nearby. Dinner that night was at The Whaler where we relaxed, the noise level rising and demonstrating the good time we were having.

On day three we met at the Whale Watch headquarters to board the bus which took us to the Wawahia moored at South Bay. We cruised a long way out to sea and were given an impressive almost non-stop commentary on whales we might see, together with other marine animals and birds. Once the boat stopped we were able to move around the vessel. We observed Pilot Whales, Dusky Dolphins, and Southern Fur Seals (so far from land!) as well as several bird species such as the Royal Albatross, Mollymawks, Petrels and Shearwaters. Alas, we saw no Giant Sperm whales which was disappointing. 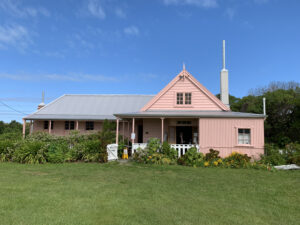 After lunch at the Why Not café, we took the coach to Fyffe House to visit the historical wooden colonial cottage that is all that remains of a whaling station established in 1842 by Robert Fyfe. On arrival we sat outside and were given a talk on the history of the cottage. At the end of the visit the gift shop was well patronised. Dinner that night was another enjoyable occasion, this time at the Thai Siam Kaikoura restaurant.

Day four began with visiting the lookout up Scarborough Road for a fantastic 180 degree view. The weather was stunning and the lookout was the perfect place for a group photo. Then we were driven out beyond the Pier Hotel and Fyffe House. Around the corner on the beach at an old whaling site lay the discarded bones of a whale reminding us of historic whaling in this area. We carried on to Point Kean and were amazed to see the extensive raised shore platform. Hamish told us about the Kaikoura Peninsula Fault responsible for uplift and the westward tilting of this peninsula and of the distinct marine-cut terraces preserved in the landscape on the peninsula.

We climbed the track above Point Kean to another lookout before following the 5.5 km track all the way to South Bay. On the way we looked down on extensive wave-cut platforms of grey Waima Formation, full of fractures and cracks, some of which are faults as evidenced by marked displacement. We saw some Southern Fur Seals and passed a predator-proof fence constructed to protect a breeding colony of Hutton’s Shearwater sea-birds. On this beautiful sunny day, when we weren’t looking down on raised rocky platforms, our eyes were often drawn to the snow-capped mountains, a real contrast to the lush green of the grass. Our bus met us at Limestone Bay and returned us to Kaikoura for lunch again at the Why Not café, much to the delight of the owner.

In the afternoon we visited the stunning new Kaikoura Museum (also the building housing the library and Council offices), finding especially interesting the filmed stories of locals at the time of the 2016 earthquake. Our last dinner was enjoyed again at the Pier Hotel. 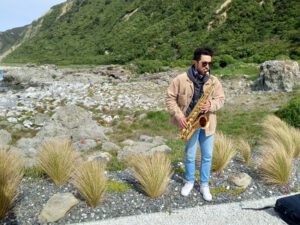 Day five, sadly our final day, was spent travelling back up the coast to Picton to board Kaitaki for the return to Wellington.  We stopped at Nin’s Bin for some to purchase crayfish and then at Paparoa Point to see more raised shore, exposed greywacke rock and Maori male cultural figures. After a brief stop at Okiwi/Karaka our final stop was at the wide sweep of Okiwi Bay where we observed the raised shore platform and more white-covered rocks showing the low tide mark before the 2016 earthquake. We were amazed to come upon Tupoki, a young man with his saxophone, who was making a video starring the Southern Fur Seal. He delighted us with his playing. Hamish pointed out the cliffs nearby which were a remnant of a raised marine terrace.

At Picton some of us bought lunch items at the Dutch bakery, Picton Village Bakkerij, before joining the ferry. It was a calm trip across the strait with some opting for more instruction from Hamish about Zealandia maps and the Kaikoura geological map. In Wellington we all joined Marion in thanking Hamish for a most enjoyable geological trip before farewelling each other and departing.