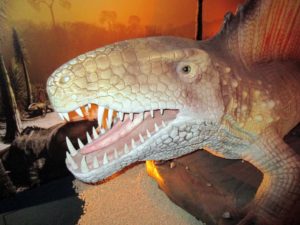 Have you ever viewed a shark with a circular saw blade for teeth, or a dragonfly with a 75 centimetre (30 in.) wingspan? Have you walked among life size animated models of creatures that roamed the earth before the dinosaurs? You can watch such animals, many breathing and opening their monstrous jaws, at the Permian Monsters exhibit at Expressions in Upper Hutt through to December 12.

Beautiful illustrations on the walls show the ancient beasts roaming and swimming in their Permian era world with vegetation and animals alive during that time. Fossil hunting provides a hands-on amusement for children, and the eye-level toothy monsters provide fun photo opportunities for parents. Posters and charts describe the geological timeframe for amateur scientists and students, and concise descriptions of how animals became—and become—extinct provide some amazing insights about animals inhabiting our planet. 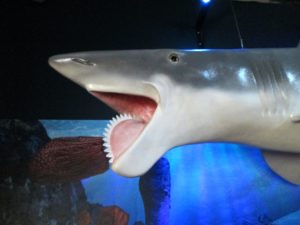 I learned that today’s animals did not arise in a straightforward and logical evolution from the earliest animals. Instead, animal species arose in fits and starts, sometimes adapting to their changing environment, and—quite often—failing to adapt, dying out, and were never to be seen again. And, after each species death, animal evolution took a slightly new path. Also, multiple mass extinctions, large and small, occurred over millions of years, so many early animals have no modern day relatives that we’re familiar with.

As Te Papa’s nature space is currently closed for renewal, the Permian Monsters exhibit at Expressions provides a science hit and an eye-opening view of our natural world. See it—it’s remarkable, suitable for all ages, and a bargain—admission is by donation. Expressions is open 7 days a week, 9:00am to 4:00pm.