Our group’s last visit on Saturday afternoon was to the only theater in New Zealand to have a Royal Charter – the Royal Wanganui Opera House. This beautiful historical building first opened in 1900, and since celebrating its centenary has been restored and earthquake strengthened and now has a Category 1 listing from Heritage NZ. 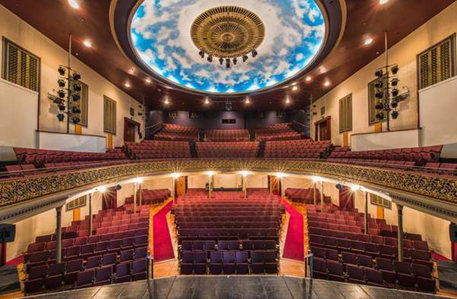 Entering from the street after admiring the classical frontage, where an open balcony is supported by 4 gold columns, we were met by Shirna Matthews who told the building’s history, and gave us a guided tour.

From the 830 seated auditorium we had a great view of the entire stage, wings, and the dressing rooms behind. The sloping stage had been extended further forward allowing for a covered orchestra pit – which we also visited.

Those intrepid enough were taken up steep flights of back-of-house wooden stairs to the flies where the impressive rigging system for curtains, lights, and scenery were displayed. We now know how a person can literally be flown in and out as if by magic. Access to the top of the fly tower was forbidden, which I think was greeted with relief by most.

Finally we were treated to drinks and delicious canapés whilst admiring the street view from the balcony.