Friends of Te Papa had the opportunity to take a tantalizing glimpse into this remarkable collection of art – remarkable for many reasons including the fact that it’s a private collection (belonging to the University) but on view to the public at all times when the University is open. Fifty to sixty per cent of the collections 614 works are always on display, all over the university. This is a very generous offering as its more usual for major public collections to display around twenty percent of the works held. On Saturday 12 November, a ‘Friends’ group were lucky to see selected works under the guidance of expert curator, Sophie Thorn, from Kaiwhakarakei Curator Collections from Te Pataka Toi Adam Art Gallery.

The University’s collection comprises exclusively contemporary New Zealand art: paintings, photography, sculptor, and more recently moving digital media. Its origins go back to the 1940’s when a particularly clever partnership emerged between faculty members wanting to hang New Zealand art on the otherwise empty walls of the old University buildings, and three staff members with an acute understanding and interest in contemporary New Zealand art – historian J C Beaglehole, Tommy Hunter and Douglas Lilburn. Later, starting in the 1960’s Tim Beaglehole became the staff representative on the purchasing committee. His thirty-year contribution to building the collection (and at times hanging it) widened the boundaries and pushed it in exciting and sometimes provocative places. His contribution to building this collection and has been invaluable.

At first, faculty donated part of their annual staff levy to the cause. Ten years later, the University Council backed the project with an annual grant of 100 pounds with a view to purchasing ‘a collection of pictures which should be regarded as meritorious and which would eventually constitute a valuable historical record of the graphic arts in New Zealand’ (Council minutes, 12 August 1958 as re-quoted in the book referred to in the title of this piece). 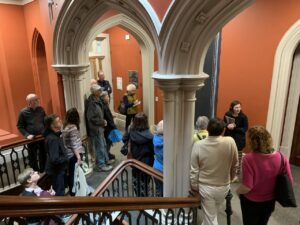 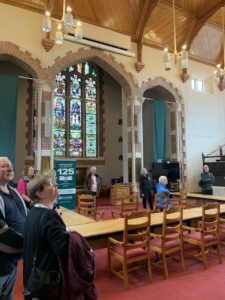 The cleverness in any collection is the way the works are hung: they can be grouped together to suggest a conversation is in progress between the works; they can be juxtaposed; or they stand alone for singular impact. Sophie explained that one of her missions when curating the works is to try and test/challenge the viewer. A major tapa cloth work by John Pule hangs in a room where Pacifica graduates have ceremonies. John Reynolds’ huge work of blocks ‘Looking West, late after-noon, low water’ is installed opposite the (west-facing) stained-glass window which depicts European settlement. Interestingly, Reynolds’ work is hung as it was originally, in Wellington art dealer Peter McLeavey’s gallery room, complete with an empty ‘door’ space.

The University’s art collection makes you think. About New Zealand life, our collective stories and how lucky we are to have these treasures accessible to anyone who ventures into the university. Our thanks to Sophie for an inspiring tour, to the remarkable people who made the collection happen, and to the University for taking the care to protect, foster and show the works.

*The title of the review is that of the book published in 2005 for Victoria University of Wellington by the Te Pataka Toi Adam Art Gallery.