David Maskill’s talk was titled “Original Fine Art Prints” and he began by posing the question: What is an original fine art print? And then said “all of the terms are debatable”. He asked the audience what they understood by the term ‘print’ and responses included: reproduction, multiple copies, many techniques. To begin with, he had six prints on display (more were added later) and they were all made by hand and existed in more than one impression. Later, we were invited to take a closer look, with magnifying glasses provided to see the incredible detail. 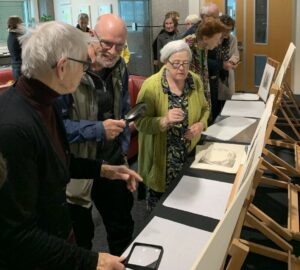 Two things were needed to make a print – a ‘matrix’, which might be a wood block, a copper plate, a piece of linoleum, etc, and a ‘support’ – in the prints on display, this was hand-made paper made from cotton rags. David explained the papermaking process and how a watermark is made (he had two examples to show us). Cotton rag paper lasts a lot longer than wood pulp paper – and some later printmakers have sourced old paper for its quality, so you can’t always assume the print is the same age as the paper!

David explained the techniques of:

– woodcut (you cut away the parts of the block that you don’t want to print so what prints are the lines left) – this was a relatively cheap technique; text could be printed on the back of an image and hundreds of thousands of copies could be produced.

– engraving on metal, usually copper (you cut into the plate using a sharp tool called a burin that creates a ‘swelling line’. These lines will hold the ink and the pressure of a press will produce the image.). This was not a cheap process. An engraver required many years of training and engraving one plate could take as long as two years.

– etching is an easier process than engraving and was favoured by a number of artists, such as Rembrandt. You cover the plate with an acid-resistant covering such as wax and then draw into this with a stylus. After putting the plate in acid, which bites into the lines you’ve exposed, you can remove the wax ground, ink it and print it.

– linocut is like engraving but using a piece of linoleum instead of metal. It became popular in the 1920s. Colour was easy to add and it didn’t need a printing press; both big advantages.

So, coming back to our original question: By original prints, we mean handmade engravings, etchings, woodcuts, etc, made by the artists themselves or by printmakers interpreting the design of an artist.

David’s presentation was enjoyed by all present. He is well known to many Friends as he has given a number of talks before and taught many art history students over his years in the Victoria University art history department. David now has his own print selling business – Mariette Prints.