Review: Healing the past.

Titiro whakamuri kia whakairo te huarahi Whakamua: When we learn from our past, we can shape our future.

Dr Aranui is Curator Taonga Maori. She works between two worlds; those of descendant, and of employee of an institution which,like so many others, can be viewed as having a questionable history. When Amber travels the world for research, or to bring ancestors home, she takes part in conversations and dialogue around this which is a very important part of her mahi. She says that we can heal the past and reconcile it through repatriation. 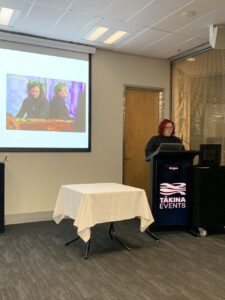 The taking of remains began as early as Cooks first foray when a pair of underpants were traded in 1770 by Joseph Banks for the head of a teenage boy. Such ‘curiosities’ were very desirable, leading to such high demand that some were stolen and sold. From the 1830s observations of Māori were made, and skulls were taken for institutions from places like burial caves, thus becoming specimens. The prevalent ‘argument’ of preservation of the history and culture of a dying race while there is still time was internationally applied.

Māori were very vocal about this behaviour, and many remains were taken to secret places to protect them from looting. Andre Reischek noted in his diary in the 1880s the lengths to which he must go to collect, and that ‘if Māori knew what was in his sack, he would be killed’. In 1945 and 1947 Maori made two petitions to the Government demanding the return of remains taken by Reischek in 1885.

International developments in the Repatriation movement, which was not exclusive to Aotearoa, but arose throughout the world began in the 1980s.  In 1984 the Te Maori Exhibition began its tour of the United States; in 1989 Māui Pomare  (National Museum of New Zealand)  brought Toi moko back to Aotearoa from the UK and USA. In 2003 the NZ Government set up the Karanga Aotearoa Repatriation Programme and mandated Te Papa staff to oversee repatriation, which also includes taonga taken as part of ‘colonial collecting’. For example, the Motonui panels which were hidden in a swamp during inter-tribal warfare, sold secretly and illegally to collector George Ortiz. And Te Hau Ki Turanga, in Te Papa, which will return to Rongowhakaata on the East Coast.

Aotearoa are viewed as leaders in this museological practice. In 2018 the first panel session on this subject resulted in the Repatriation Research Network for New Zealand museum staff involved in the return of kōiwi tangata ( human remains of Māori origin) and to which all of our major museums and most smaller ones belong. This supports provenance research, storage and care, and obligations around holding human remains, while developing policy and practice. The National Repatriation Programme supports museums to return all human remains in their collections, plus iwi and other international communities in the return of their tūpuna/ancestors.

When we repatriate human remains we must never forget that these are not objects, but ancestors with a right to rest in peace. Amber concluded her talk by saying that this was just an introduction to the topic, so we hope that she will return with more for us in the future!