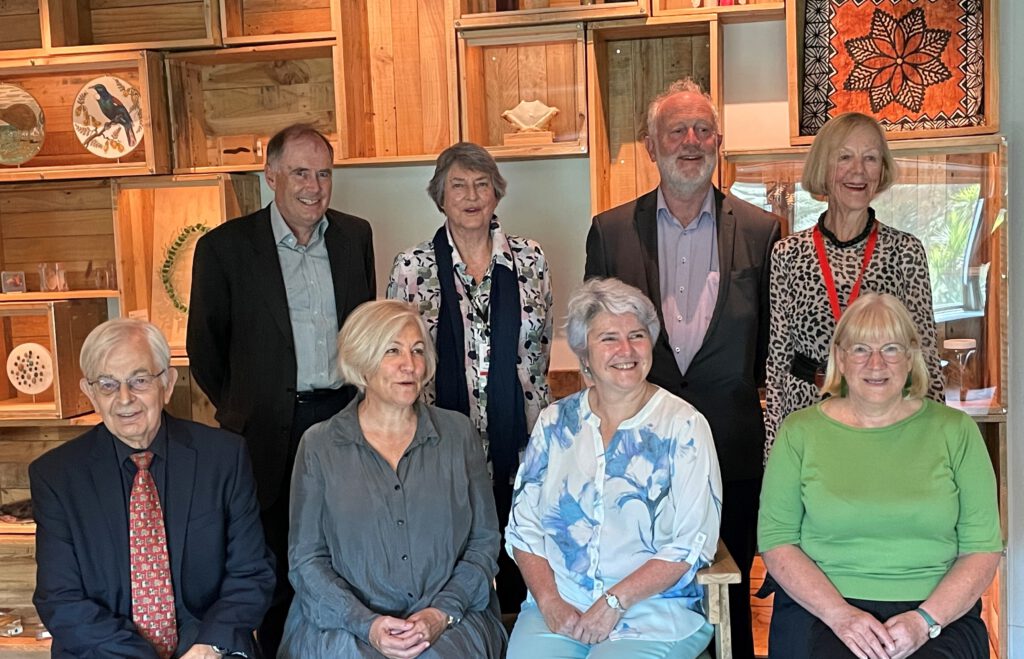 Koenraad Kuiper (President) is a linguist and poet who emigrated to New Zealand from the Netherlands in 1951, living first in Auckland, then Wellington, and then Christchurch. He is now Professor Emeritus at the University of Canterbury where, in addition to teaching and researching linguistics, he served on the University Council and as Dean of Arts and Head of School. Koenraad is the author or editor of fifteen books including four of poetry and over a hundred research papers and book chapters. He is a graduate of Victoria University of Wellington, with doctorates from Simon Fraser University in Vancouver and the University of Canterbury. He has held two Fulbright Fellowships in the USA, a NZ-China Fellowship in the People’s Republic of China and been a Fellow at the Netherlands Institute for Advanced Studies in the Humanities and Social Sciences. After six years in Sydney, where he was an Adjunct Professor at the University of Sydney, on moving to Wellington, he has become a trustee of the Randall Cottage Writers’ Trust and The Dutch Connection Trust.

Marion is a graduate of Auckland and Canterbury Universities where she completed Bachelor of Arts in Political Studies and Master of Arts in Political Science.  She began her career with the Department of Trade and Industry and joined the Ministry of Foreign Affairs and Trade in 1989.  Early postings in Rome (as Assistant Trade Commissioner) and Paris (as Deputy Permanent Representative to the OECD) were economically focused, as were management appointments in Wellington to Trade Negotiations Division, Australia Division (Closer Economic Relations) and Economic Division.  Her career shifted to a security and development focus with the first posting in Honiara during the “Tensions” period, followed by 3 years in Pacific Division.  She was then seconded for two years to New Zealand Police to establish New Zealand Police’s Policy Group.  On return to the Ministry, she developed and implemented a Knowledge Management strategy before heading off as High Commissioner to Port Moresby and then to Honiara for the second time.

Marion retired from the Ministry in 2017 and in 2018 completed a Master of Business Analysis in the School of Information Management at Victoria University of Wellington.  She is a Senior Fellow of the Centre for Strategic Studies of VUW and retains a strong interest in the Pacific, including collecting modern Pacific art. Her other great interest is couture sewing.

Tim Steel (Treasurer) qualified as an accountant with a BCA from Victoria University. He was a taxation manager with a major accounting firm, a significant bank, insurance companies and fund managers. He is currently providing taxation and accounting services to a wide variety of clients and is also the treasurer and adviser to a number of non-profit and charitable organisations. He enjoys playing tennis, skiing, reading and an occasional bike ride when the weather permits.

Nicola Kirkup (Secretary) graduated from Pembroke College, Oxford with a Bachelor’s degree in Oriental Studies, solemnly vowed never to take another examination, and subsequently went on to obtain a Master’s in Business Administration from the Imperial College, London and diplomas in Astronomy and Physical Sciences from the Open University.  She emigrated to New Zealand after twenty years of this and that for the civil service in London and Brussels and retired in 2018 after nine years of this and that for the New Zealand Treasury.  She is a member of Wellington City Chorus, currently the world champion mid-size women’s barbershop group, and the Wellington Late Starters’ Orchestra who will never win any prizes but provide entertainment and achievement for beginner and rusty instrumentalists.  With partner Rory she forms the nucleus of an erratic pub quiz team.

Bridget Hodgkinson’s first career was nursing. She trained at Wellington Hospital working there and at Kenepuru Hospital in various roles and areas. In the 1990s she studied at Victoria University of Wellington, graduating Bachelor of Arts in History and Art History and Diploma in Arts in English Literature. Subsequently she worked in research and report writing at the Waitangi Tribunal unit and was involved in ESOL teaching. Bridget is a vestry member of her local church and belongs to a number of Wellington organisations.  Her interests include travel of all kinds, music and the arts, Scrabble, and following tennis and cricket. With her husband and family she has greatly enjoyed exploring the waterways of England and Wales.

Dr Richard Norman is Adjunct Research Fellow, School of Management, Victoria University of Wellington. Highly regarded in the academic world, Richard Norman teaches in human resources management, and training and development, with a particular focus on New Zealand public sector organisations. He also has a keen interest in the history of Wellington, particularly the city’s social history, and he is a committee member of Historic Places Wellington.

Helen Pinson’s career path has not taken a direct route, but has been varied and interesting, including, amongst others, art, property, retail, journalism, and stakeholder engagement.
She is a charter member of Friends of Te Papa, and has more recently been writing reviews for them. She has a Bachelor of Science (Hons) in Valuation and Estate Management and a Diploma in Journalism. Her governance experience has been in art and education. She was Chair of Kilbirnie School board of trustees, and a trustee of Pablos Art Studio. She is currently a trustee of Wellington City Life Education Trust and is a volunteer with Kilbirnie Citizens Advice Bureau.

Ann Walker recently retired as Development Officer of Scots College in Wellington and was co-opted on to the Executive Committee this year.   She brings to her new role many years of experience in stakeholder engagement and stewardship and aligned events.  In 2019 the Independent Schools of New Zealand awarded Ann an Honours Award for Service to Development & Advancement.