How to… Conserve the Treaty of Waitangi

Tour Te Papa’s genetics lab, learn about DNA tests that have been done on the Treaty of Waitangi and discover the history of its conservation. 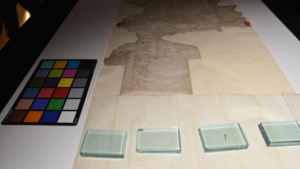 Last year DNA research confirmed that a blank piece of parchment labelled as coming from the bottom of the Waitangi sheet was indeed what it claimed to be. As it had been cut from the sheet before any of the damage we see today had occurred, this fragment offers conservators a rare opportunity to study changes the Waitangi sheet has encountered and opens more doors for future research into parchment conservation.

Join us to discover what animal the Treaty is made from, the hard life it’s had in the past (nibbled by rats and damaged by water), what early restoration attempts consisted of and how the teams research will inform future conservation efforts.

A special behind the scenes tour of Te Papa’s genetics lab and a session on parchment conservation will follow the talk from the team.

Lara Shepherd is an evolutionary biologist in the Natural History team at Te Papa. She uses DNA sequencing to study the relationships of New Zealand’s plants and animals. Recently she has become interested in using DNA methods to investigate the biological components of cultural objects

Peter Whitehead ACR FIIC is Collection Care leader at the Alexander Turnbull Library. He has thirty year experience specialising in the conservation of books and manuscripts including parchment . From 2012-2017 he was a  member of the conservation team that planned and prepared The Treaty of Waitangi for the He Tohu exhibition.

Anna Whitehead, Archives NZ conservator since 2015, worked as Conservation Manager at Canterbury Cathedral Archives and Library/Kent Archives Service in the UK, having previously had her own paper and book conservation business for many years. In her present job, Anna is lead conservator for Archives NZ of the documents in the He Tohu exhibition – Treaty of Waitangi, Declaration of Independence and the 1893 Women’s Suffrage Petition.

Attendees will be split into 4 groups for the tours and morning tea will be provided.

Please note: This session will take place at Te Papa’s Tory Street facility. This is 169 Tory Street, between Havana coffee and the war memorial park.

How to… sessions are designed to share the amazing knowledge and talents of Te Papa’s staff. Speakers will share the work they do and how they do it.