Beyond Te Papa: The Printed Image & A Century of Colonial-Made Furniture 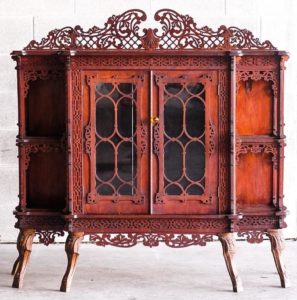 Chippendale Chinese Revival fretwork cabinet in kauri and jarrah made in Auckland, 1912

New Zealand’s earliest furniture from the 1830s-60s can be traced to just a handful of London-based designers. Local cabinet makers used their patterns for Greek, Gothic, French and Renaissance to overwhelmingly influence the content style of colonial homes. From the mid-1870s New Zealand furniture making firms began to publish their own trade catalogues to advertise imports and their own locally-made wares. Invariably those publications were illicit reproductions of in-house designs copied from large English cabinet making firms.

This presentation will discuss the three aspects of pattern production that influenced colonial domestic furniture design; the designer, the manufacturer’s trade catalogue and the publisher’s subscription magazine. It will use rarely seen examples of colonial-made furniture to illustrate how simple line engravings were made into important, but often misunderstood, works or art.

William Cottrell is a Friends of Te Papa member and an Art Historian and Restorer specialising in colonial furniture. He gave up his profession as a television editor to pursue a love of woodworking, design and history. Through William’s efforts to preserve our largely unrecognised but fascinating cabinetmaking history many pieces of furniture are now in museums around the country. There are around seventy or so alone in Te Papa Tongarewa, Museum of New Zealand.

William wrote Furniture of the New Zealand Colonial Era 1830-1900 in 2006 for which he won the Montana Best Reference & Anthology and Best First Non-Fiction Awards. He is currently writing a second book for Te Papa Press outlining the travel of designs across the world to nineteenth-century New Zealand and our earliest colonial-printed trade catalogues. He has a Doctorate in Art History and and can from time to time be found poking around junk shops.