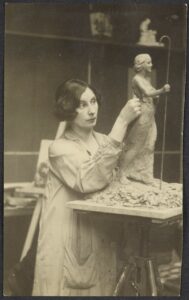 Join us for an illustrated lecture by Dr Mark Stocker as he reveals to Friends the story of sculptor Margaret Butler (1883–1947). Margaret  occupies a unique place in the art history of her native Aotearoa New Zealand. After a long apprenticeship in Wellington, she spent the period 1923–34 in Europe, mostly in Paris, where her work was admired by Antoine Bourdelle and Charles Despiau, then two of the world’s most famous sculptors. After her return home, Butler was critically praised, but attracted few commissions due to her retiring personality, the low artistic status of sculpture, the economic depression and the relative lack of institutional interest.

Her later works are nevertheless among her most interesting and significant in their fusion of European style and technique with Māori subject matter. Although since 1950 almost all of Butler’s work has been in the custody of the National Art Gallery, now part of Te Papa, it is rarely exhibited and Butler’s marginalised status, which was observed even in her lifetime, continues. But all is not lost: she is one of the featured artists in the forthcoming book, a world first, Discovering Women Sculptors (due later in 2023), with a chapter written by Mark Stocker; and the New Zealand Portrait Gallery plans a small Margaret Butler exhibition, also later in 2023.

Dr Mark Stocker, FSA, FRHistS, is a semi-retired art historian who lives in Christchurch. Well known to the Friends of Te Papa, his final job was as Curator, Historical International Art. Mark has over 250 publications to his credit, particularly in sculpture and numismatics. His 11 books include New Zealand Art at Te Papa (2018) and When Britain Went Decimal: The Coinage of 1971 (2021). Later in 2023 he plans to travel to Ireland and Britain to work on a book on the 1928 Irish Free State coins, entitled A Coinage for Ireland (Spink/British Numismatic Society; forthcoming).

Ticket includes talk, parking and a glass of wine upon arrival.