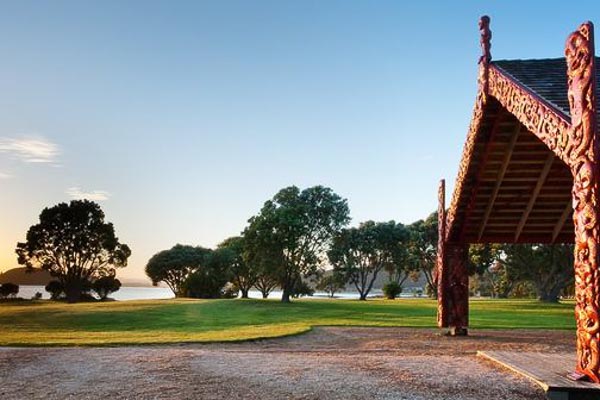 Our tour last year to the Far North with its focus on history and architecture, was a wonderful and inspiring tour. The day at Waitangi with Dame Claudia Orange was a highlight, a thoughtful and changing experience. As so many of you expressed interest in going, we are thrilled that Claudia has agreed to accompany us on a second tour to the Far North. 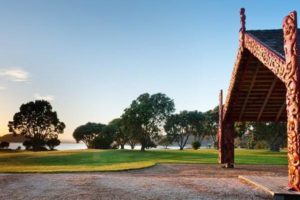 The tour commences at Waitangi on the evening of Thursday 25th October. After having checked into the Copthorne Hotel and Resort, we get together in the hotel lobby (a few steps away from the bar) and then take a short walk to the Waitangi treaty grounds where we have exclusive use of the Whare Waka Café for the evening. We’ll open the proceedings with a glass of bubbly before enjoying a 2 course hangi dinner.

After breakfast on Friday, we head back to the Treaty Grounds for a tour of the Museum of Waitangi Te Kōngahu. There is a lot to see and much information is included in the interactive multimedia displays. After time to have a good look around, Treaty Historian Dame Claudia Orange will talk about developing the exhibitions and answer any questions.

Following this session you have two hours to have a coffee and lunch at either the Waitangi Café in the Visitor Centre or the Whare Waka Café, and time to wander and further explore until we get together again for private tour of the Treaty Grounds including the flagstaff, the site of the first signing, the carved meeting House, and the Treaty House.

You also have the option of a 30 minute cultural performance which is included in your day pass before returning to the hotel for a drink and an informal chat with Dame Claudia before dinner (own arrangements). 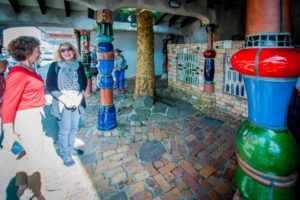 Saturday morning sees us going further afield by coach. 20 minutes inland we stop at the town of Kawakawa, renowned for (amongst other things) the amazing public toilets designed by Friedrich Hundertwasser.

Heading south then to the historic site of Ruapekapeka Pā.  Scene of a famous battle in the New Zealand Wars in 1846, and described by one of the British soldiers  “a most extraordinary place, – a model of engineering, with a treble stockade, and huts inside, these also fortified…”  Known as ‘the bat’s nest’, for its elaborate system of trenches and tunnels, it was the strongest pā ever built in New Zealand.

Then we head north, stopping to view the Holy Trinity Church at Pakaraka, the local church of Henry Williams and his family, before continuing to one of the earliest centres of European settlement and the Mission House at Waimate North, where we have a tour of the house and grounds before a lunch in the historic schoolhouse. From there we drive to KeriKeri, where we will park the bus within short walking distance of the historic sites that we will visit;  the Stone Store and Museum, and Kemp House.  You will also have time to view the St James Church, and take a walk to the Kororipo Pā for views over the Kerikeri River and Kororipo Basin.

Which nicely leaves some time for refreshments before settling in for a dinner at the Pear Tree Restaurant, and a chance to admire the eponymous tree – a Bon Chrétien –  still producing edible fruit as it approaches it’s 200th anniversary of being planted under the direction of Samuel Marsden. 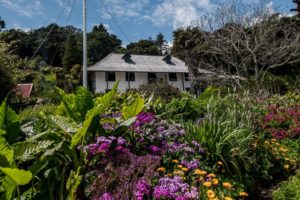 Sunday the 28th, our final day sees us taking a ferry across the harbour to Russell formerly known as Kororāreka, the first permanent European settlement and sea port in New Zealand, and briefly its first capital.  A tour of Pompallier Mission, the historic printery/tannery/storehouse of the early Roman Catholic missionaries will be a highlight as will strolling around Russell, and taking a look at Christ Church – Te Whare Karakia o Kororareka – the country’s oldest surviving Anglican church.

The stroll returns us conveniently near to the ferry wharf, at the entrance to the famous Duke of Marlborough Hotel, where we have a leisurely lunch booked for you on the verandah overlooking the waterfront, before you can return to Waitangi at your own pace.

The cost per person is $720 with accommodation on a twin share basis.  A single room supplement is an additional $265 for the three nights.  A summary of this itinerary, with details of what is included in the tour cost, plus the important Terms and Conditions & Cancellation Policy is available here.

There are a few places available on this tour.  If you would like to go on the tour please register your interest and we will get back to you with payment details etc.

Around Waitangi and the Bay of Islands