Beyond Te Papa: The Give & Take of Biodiversity

With Victoria University: A fossil history of life, death and the mayhem in between

To the best of our knowledge, Earth is the only place in the universe that is home to life.

How and why has this life developed? What were the great explosions of biodiversity that launched the living world? And what are the Earth-crunching crises that nearly ended it all?

Palaeontologists from Victoria University of Wellington and GNS Science will explore these questions, whilst looking at our own stunning fossil record found on the wobbly nugget of rock known as Aotearoa that sits atop the drowned continent of Zealandia.

Join geologist, Professor James Crampton as he traces the development of complex life and ecosystems around the world over the past 600 million years. 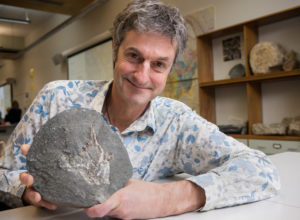 Professor James Crampton is a palaeontologist at Victoria University of Wellington and GNS Science. His early research concerned giant Cretaceous marine clams, up to 2 m long, that lived at the same time as the dinosaurs. Over the past 20 years or so, he has also worked on diverse topics from the quantification of biological shape and evolutionary patterns, to the rates and processes driving evolution and extinction in the marine plankton.  He believes passionately in the value and importance of Zealandia’s remarkable fossil record, which holds the keys to understanding evolution of the Earth system over a huge segment of the planet we live on.

The give and take of biodiversity: mass extinctions with Associate Professor Mike Hannah – July

Zealandia: down but not out! with Dr Liz Kennedy – August

International Fossil Day field trip: Discover the fossils of the Wellington region with a field trip in October

Tickets will be available for purchase at the door.